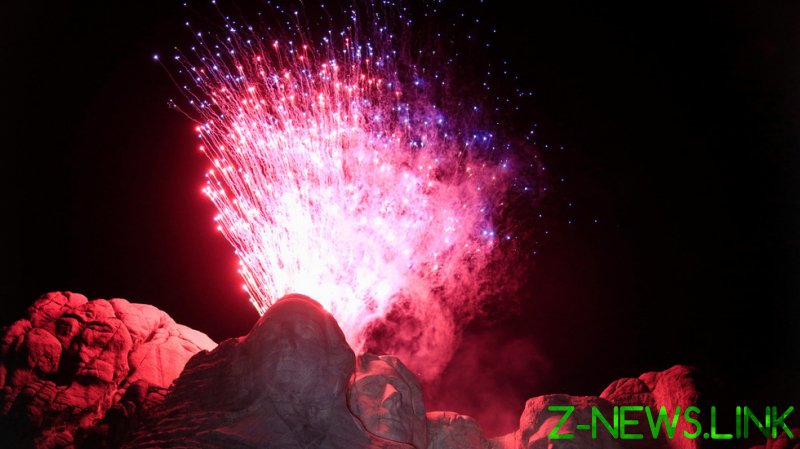 National Park Service (NPS) regional director Herbert Frost said in a letter seen by the Hill that the agency was “unable to grant a request” to stage fireworks at the memorial due to “potential risks to the park itself and to the health and safety of employees and visitors.”

Frost also cited opposition by “many tribal partners” of the park to the sight of fireworks, and noted that while the situation with the Covid-19 pandemic is still “dynamic,” it was still impossible to greenlight the request.

South Dakota last year hosted a grandiose Independence Day celebration-slash-political-rally, attended by high-profile Republicans and headlined by former President Donald Trump, who gave a speech in front of thousands of his supporters. Some 7,500 tickets were issued for the fireworks ahead of the event.

The event drew intense criticism from Democrats and mainstream media, who panned the organizers for not enforcing social distancing rules and making mask-wearing optional. In the run-up to the celebration, the Democratic Party went as far as to suggest that Trump’s rally at Mount Rushmore would honor “white supremacy,” only to delete the tweet afterwards.

The mainstream media also had a field day attacking Trump. CNN, for instance, reduced the iconic site to “a monument of two slave owners” despite earlier describing the colossal sculpture, built on land sacred to the Lakota tribe, “quite a sight” and “a monument to four great presidents” when Sen. Bernie Sanders and former President Barack Obama visited it.

A spokesperson for South Dakota governor and Trump ally Kristi Noem told the Hill that the state still hopes to host the event, while citing Biden’s first presidential address on Thursday, in which he promised Americans will be able to celebrate the national holiday.

“The best place in America to hold such a special celebration would be Mount Rushmore, fireworks included,” said the spokesman, Ian Fury.

While Biden did say that he hopes families, driven apart by Covid-19 restrictions, can have get-togethers on July 4th, he suggested that any gatherings should be small and take place “your backyard or in your neighborhood,” ruling out any large-scale celebrations.

The memorial hosted 11 fireworks displays from 1998 to 2011, and then again last year. Events in 2002, 2010 and 2011 were cancelled due to risk of wildfires, two dozen of which were sparked by fireworks before the shows were placed on a prolonged hiatus, according to Wildfire Today.