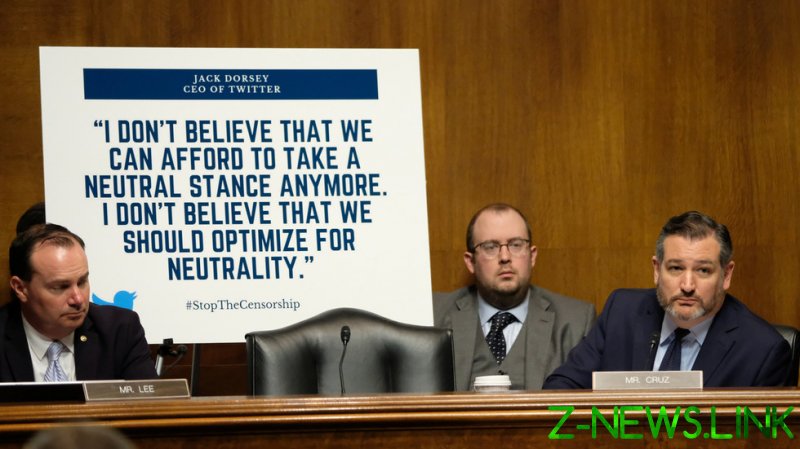 Self-styled “disinformation specialist” Dave Troy announced on Friday that he’d cracked the case of why Parler, the microblogging platform whose user count has exploded over the past year as Twitter cracked down on opinions outside the neoliberal centrist mainstream, is growing so fast.

How was Parler able to draw so many users despite lacking hundreds of millions of dollars in venture capital funding and the high-priced software developers that buys? Troy pondered. While Occam’s razor – the theory that the simplest explanation is usually correct – might suggest that people censored by Big Tech had merely flocked to an alternative made famous in certain circles by big-name conservatives banned from better-known platforms, Troy’s conclusion was about as far from Occam’s razor as it’s possible to get.

Instead, he used what might be termed “Putin’s razor,” suggesting in a lengthy Twitter thread that Parler was actually a Russian plot to destroy wholesome American social media companies’ Section 230 liability protection – a legal provision President Donald Trump has long threatened to repeal.

The TEDxMid-Atlantic founder used as a starting point Parler founder John Matze’s marriage to his Russian-born wife Alina Mukhutdinova, whom he met in Las Vegas while she was on vacation with a friend in the US. Despite having no further information about why Mukhutdinova was in the US, the very notion of a Russian “visiting” the country sounded alarm bells in Troy’s mind, as his thoughts apparently jumped to a 2014 “road trip” by two employees of the much-hyped Russian ‘troll farm’ the Internet Research Agency, blamed by Russiagate conspiracy theorists for helping swing the 2016 election to Trump.

While Troy admits Matze worked at several tech firms, including Amazon, he finds it much more important that the young developer and his wife were married in Russia in a government ceremony overseen by (gasp!) the bride’s mother, who received an award from the Soviet government after a lifetime of service. Apparently, Troy believes the entire government was staffed by spies.

Troy’s theory betrays little understanding of how social media platforms grow, as he seems to find nefarious Parler’s initial low user number and sudden growth after “big name” users like conservative provocateur Candace Owens and journalist Cassandra Fairbanks joined. He also mischaracterizes the pair as “‘far-right’ LARPers,” perhaps forgetting it was establishment journalists like himself that characterized them as ‘far right’ in the first place while their politics fall somewhere inside the typical conservative spectrum. The growth in users, Troy claims, was swollen with “many operatives,” though he doesn’t name these.

After coming within a hair’s breadth of deeming rapper Kanye West (“Owens’ pal”) as “far-right,” Troy made several logical leaps, declaring that Parler has not only set its sights on destroying Section 230 (without supplying any evidence) but is “aiming to challenge firms at Twitter scale” without the finances to do so.

Armed with these baseless assumptions, Troy swoops in for the kill, declaring Parler will never find programmers devoted to destroying the edifice of US social media because they can’t afford to hire people at the going rate in Silicon Valley.

Therefore, he assumes, they must be getting outside money – rubles, specifically. After all, Matze’s wife appears to be a fan of “The Americans,” the US TV show about a Russian spy couple masquerading as ordinary middle-class Americans during the twilight years of the USSR, and has a Russian Instagram username, and also follows Twitter accounts associated with the country where she was born and raised!

Or is it yuan? They do seem awfully anti-China…you know, like the rest of the pro-Trump conservative movement. The rest of Troy’s evidence apparently consists of the platform’s parent company being registered in Delaware, like most corporations that want to avoid US regulations, by Rudy Giuliani’s former law firm – one of the best-known in the US. Troy admits to having heard “some speculation” that the source for Parler’s money is right-wing political operatives the Mercer family, but that’s so much less sexy than a Russian spy op, no?

Not content with sliming Matze’s wife as a Russian “honeypot” and his company as a foreign spying operation, Troy even made a detour into smearing the Soviet military, mentioning its soldiers did “a lot of raping in Berlin” (never mind that if one is keeping score of WW2 atrocities, the US, Britain, and, well, Germany are pretty far ahead).

Admitting his own theory doesn’t really add up and that the parties involved hadn’t done anything illegal, Troy nevertheless piled on the persuasion with an impressive-looking graphic showing Parler’s better-known users, declaring it depicted “the usual Russia aligned operatives,” though it’s unclear who of the hundreds of names is supposed to be Russian as most of the familiar names represent Trump supporters falling somewhere on the right-wing political continuum.

Troy appears to fancy himself a crusader against the pro-Trump faction of the right wing and is deeply invested in the Russiagate conspiracy theory, so much that he recently retweeted Iraq War architect Bill Kristol’s condemnation of Trump’s Pentagon personnel shakeup with the comment that it constitutes an attempted takeover of the US intelligence community by Russian intelligence services. He has also signed on to former CIA director John Brennan’s baseless claim that Trump plans to “do a coordinated dump of classified intel that causes chaos and damages US interests,” apparently internalizing the QAnon mythology he has deployed so much energy attempting to have kicked off the internet.

Social media users who complain about censorship are inevitably told to ‘just make another platform’ by the gloating establishment. Yet Parler is hardly the first ‘alternative’ platform to be cartoonishly persecuted for its attempt to provide an alternative to Twitter, Facebook and YouTube. Bitchute, a YouTube alternative, had its links banned from Twitter entirely before user outcry led the platform to “only” present users clicking on a link with a warning screen claiming the link could harm their computer (even though Bitchute links contain no executable code). Bitchute links remain banned on Reddit.

Gab, a Twitter alternative, lost its hosting twice and had its app yanked from both Google and Apple’s app stores after a rash of scare stories claimed the platform was a breeding ground for right-wing extremists following a shooting at a Pittsburgh synagogue in 2018. While the mass shooter in question also had Facebook and Twitter accounts, and Gab even helped the authorities identify him, it was Gab who was punished.