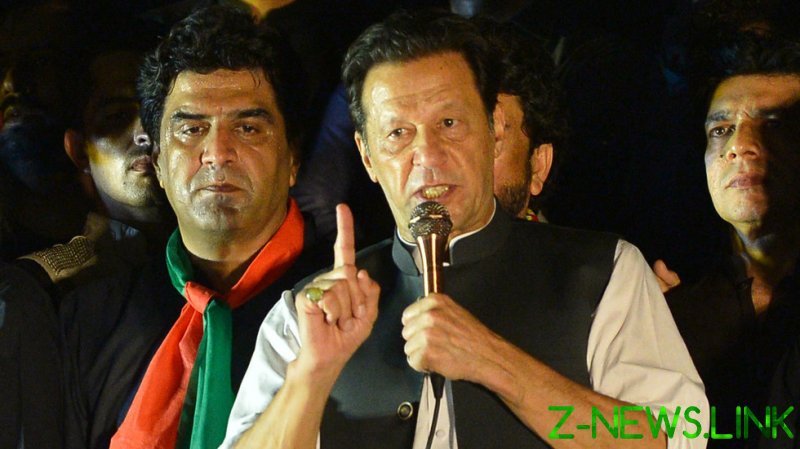 Ousted former Pakistani Prime Minister Imran Khan has been charged with violating the country’s anti-terrorism laws for allegedly threatening a female judge and two senior police officials during a rally in Islamabad on Saturday night. Video reportedly shot at his home on Sunday evening shows police surrounding the residence hours after a police report was filed against him.

In his speech during Saturday’s rally, Khan threatened to file charges of his own against Judge Zeba Chaudhry, two police agencies, the Pakistani Election Commission, and other political opponents, warning they should prepare to face “consequences” over their abysmal treatment of his chief of staff, Shahbaz Gill. He had organized the rally in Islamabad’s F-9 Park in solidarity with Gill, who was arrested last week on sedition charges.

Later that night, the country’s digital media watchdog, called PEMRA, forbid satellite stations from airing the speech – or any future live addresses from the ex-prime minister – without a time-delay mechanism “to ensure effective monitoring and editorial control.”

Khan has been “continuously targeting state institutions by leveling baseless accusations and spreading hate speech through his provocative statements against state institutions and officers,” PEMRA explained in its directive on preemptively censoring the politician. Khan’s so-called “hate speech” was “prejudicial to the maintenance of law and order and is likely to disturb public peace and tranquillity,” they claimed.

Khan’s attempt to livestream his speech on YouTube was also stymied when the Google-owned video platform was taken offline in a coordinated move by eight Pakistani internet service providers, according to Netblocks. The site returned to functionality as soon as Khan finished speaking.

Khan was ousted as prime minister in April following a controversial no-confidence vote that he dismissed as a US-led conspiracy to have him removed for opposing Washington’s “forever wars” in Central Asia and the Middle East.