Home / WORLD / ‘Paid to serve, not to die’: French police walk out to call on government to protect them amid spate of violence (VIDEO)

‘Paid to serve, not to die’: French police walk out to call on government to protect them amid spate of violence (VIDEO) 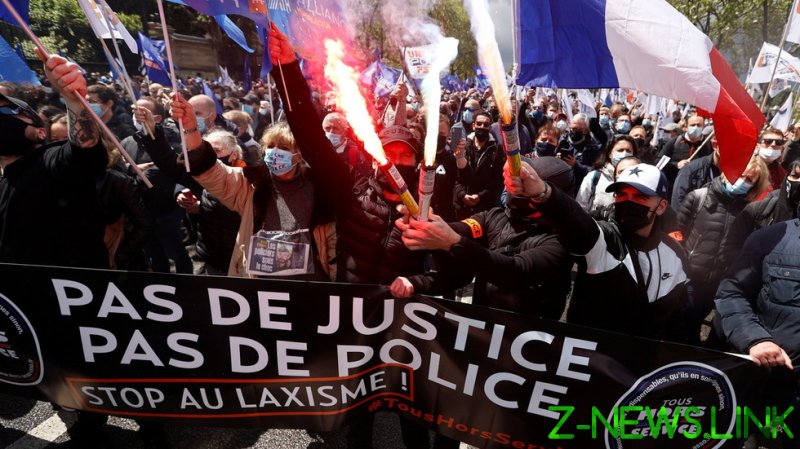 Interior Minister Gerald Darmanin was booed by some on Wednesday as he briefly attended the rally in a show of support. “This can’t go on any longer. You really need to protect us. It’s getting worse,” one officer told him.

The protest, held outside the National Assembly building in Paris, attracted thousands of law enforcement officers who waved flags and banners. One banner read, “Paid to serve, not to die.”

Unions have complained that the government is failing to protect officers from violence against the police and the state. During their speeches on Wednesday, union leaders demanded in-depth reform of the justice system and the establishment of minimum prison sentences for anyone found guilty of attacking a police officer.

“The sentences must be executed, we must severely punish recidivism,” insisted Olivier Varlet, the secretary general of the UNSA-Police union.

Officers also paid tribute to those killed and injured in recent weeks in the line of duty. Within the last month, one policeman was killed during a drug raid while a police force employee was stabbed to death outside her station.

In April, the French parliament passed into law a controversial bill on “global security” containing a heavily criticized provision on penalizing the malicious dissemination of images of the police. The bill, particularly Article 24, which penalizes the sharing of images that maliciously identify police officers in operations by face or name, provoked major demonstrations in the fall and new year.