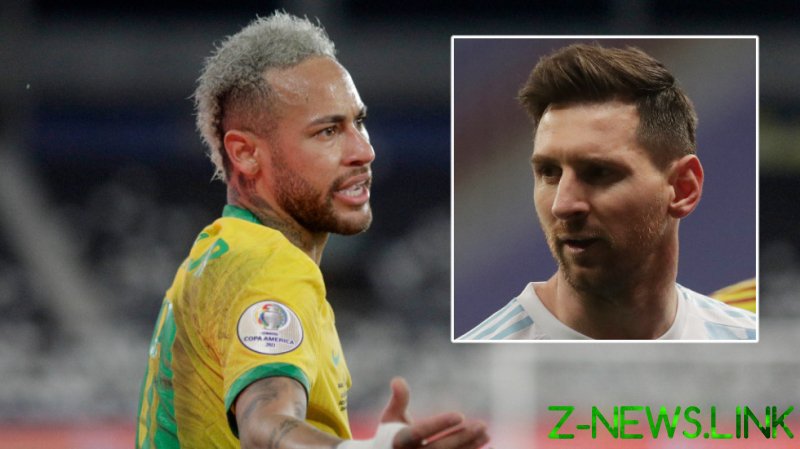 Going into the game, history is on the side of the five-time World Cup winning home team and current Copa America holders, who were handed hosting responsibilities at the last minute.

The latest edition of the world’s oldest international tournament was meant to be jointly shared by Argentina and Colombia.

But as they suffered a covid spread and social unrest respectively, organizers Conmebol decided to relocate their showpiece to the continent’s largest country, which is suffering from both of these issues.

TV ratings for the competition have slumped in Brazil, which have not been helped by an odd format that saw the teams split into two groups of five with only one side eliminated before the rest advanced to the knockouts.

Over the other side of the Atlantic, kick-off times in the early hours of the morning after European fans have been watching the Euro until almost midnight haven’t helped pique interest, either.

Yet everyone is thrilled by what a Brazil vs Argentina final could deliver, in what is another instalment of international football’s rivalry.

While Argentina have only beaten their neighbors once in a final – in this tournament, in 1937 – Brazil have defeated their foes three times in the 2004 and 2007 Copa America finals, plus a 2005 Confederations Cup last dance in Germany.

For all the tradition, let’s not kid ourselves of what the main narrative is here.

It is Messi vs Neymar, who have just been voted the tournament’s joint-best players and are arguably the best two players in South America, if not the world.

The former Barcelona team-mates who won the treble under Luis Enrique and formed the all-conquering ‘MSN’ front line trident with Luis Suarez that was arguably the greatest the sport has ever been.

With Neymar missing Brazil’s victorious run two years ago through injury, both men are chasing their first major honors with their country despite claiming Olympic gold, and the PSG star is all too aware of the stakes involved.

“Messi is, as I’ve always said, the best player I’ve ever seen play and he’s a great friend. But now we’re in a final, we’re rivals. I want to win and I really want to win this title, which would be my first Copa America,” he told reporters.

“Messi has been looking for his first title with the national team for many years, and every time we [Brazil] are not present at the tournament, I cheered for him. That’s what [I did] in the 2014 World Cup final, when he faced Germany.

“Now Brazil is in the dispute, so our friendship is on the line. The respect between us is still great but only one can win.

“When you’re friends with someone, it’s hard to forget the friendship you have – but, for example, when you play video games with a friend, you want to beat him anyway. It’ll be the same thing on Saturday.”

A serial competitor who hates losing, Messi will put niceties aside at kick-off in the search for a long-elusive conquest with La Albiceleste, after suffering heartbreak at the last hurdle on no fewer than four occasions – three in the Copa (the first to Brazil) and once in the World Cup at the very ground where the final will take place.

“I would swap all my Golden Boots for one trophy for Argentina,” he allegedly confessed to compatriot reporter Veronica Brunati in the build-up to the competition.

And with four goals and five assists – the best of any player – he has certainly played like it.

Not only looking to emulate the late, great Diego Maradona by bringing happiness to his people, there is also their wider drought of 28 years after back-to-back triumphs in 1991 and 1993 with the likes of Diego Simeone and Gabriel Batistuta.

Turning 37 at the next go around in 2024, this could be his last Copa. And as bizarre as it sounds, there are also plenty in Brazil that wish him success.

He boasts plenty of fans across enemy lines that would like to see the number 10 put one of the great stains on his record to bed for once and for all.

“They admire him, they adore him,” wrote current Sao Paulo FC coach and former striker Hernan Crespo in a column in national newspaper La Nacion.

But there also complicated factors at hand. Opponents of the president, Jair Bolsonaro, also don’t want to witness Brazil winning a cup that they felt should never have been contested – yet he championed – as their nation’s Covid death toll passes 530,000.

That aside, though, the legendary Mario Zagallo – who scooped the World Cup alongside Pele in ’58 and ’62, then managed him to the trophy in 1970 while the assistant manager at USA ’94 – is not impressed.

“They have to go to the asylum.”