Home / WORLD / Our democracy is under threat… by too much democracy, say lawmakers calling for removal of ‘conspiracy theorist’ rep

Our democracy is under threat… by too much democracy, say lawmakers calling for removal of ‘conspiracy theorist’ rep 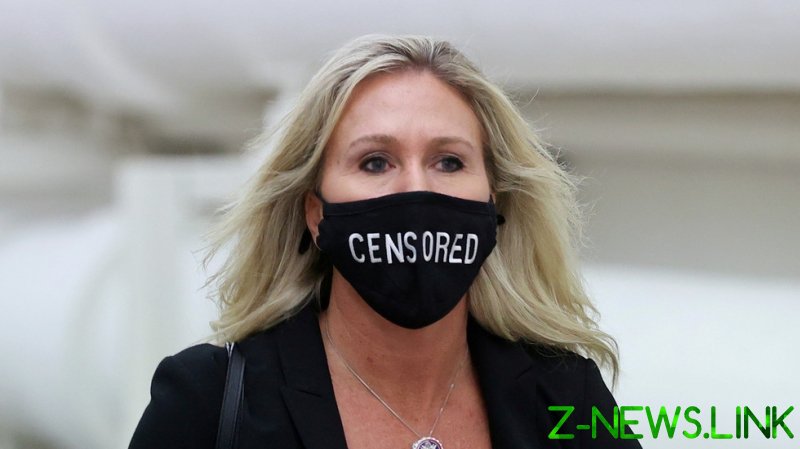 While Democrats and the media establishment have been disparaging Greene since before she won her primary, mocking her as the “QAnon candidate” and insisting she’s dangerous for spreading “misinformation,” California Democratic rep Jimmy Gomez has gone one step further, demanding she be removed from office altogether – a rare measure that has been used fewer than two dozen times in US history.

Gomez announced on Wednesday he would introduce a resolution to expel Greene from Congress, a move that has been gaining support from her Democratic peers in the House even though it is wildly undemocratic and effectively suggests voters should have no say in choosing their government. Given that the party has been harping on “our democracy” for months in a (successful) bid to defeat former president Donald Trump, the hypocrisy on display is truly massive.

The California Democrat has pointed to social media posts appearing to express support for conspiracy theories about both the Parkland and Sandy Hook school shootings, the QAnon psyop, and the notion that a “bullet to the head” would be the only way to pry House speaker Nancy Pelosi out of office, denouncing it all as “advocacy for extremism and sedition.” While Greene has since distanced herself from most of these opinions, she was democratically elected with that slate of views, and demanding she not only receive a reprimand from House minority leader Kevin McCarthy but also be stripped of her committee assignments and even her congressional seat is telling voters in no uncertain terms that their opinions do not matter.

It’s not like high-ranking Democrats haven’t had a lot of encouragement for their conclusions that Greene has got to go. Everyone from establishment journalists to gun control advocates, to centrist Republicans have been demanding her removal at top volume, many since before she was sworn in. She’s not the only one on the Democrats’ chopping block, either – Senate Republicans Ted Cruz (Texas) and Josh Hawley (Missouri) have also been placed on the naughty list for voting against the certification of Joe Biden’s November election victory, as have all 147 of the Republican congressmen who voted thus.

And while some lawmakers have stopped at merely demanding she be stripped of her position on the Education and Labor Committee, claiming that her questions about Parkland somehow constituted “mocking” the dead children, Gomez and others have sought to muscle her out of the House altogether, their hysterical attacks resembling the high-volume propaganda assaults on Trump over the last four years.

In a way, however, the attacks on Greene are even more absurd than the Orange Man Bad brigade. She ran unopposed in the general election for her Georgia district after winning the Republican primary. Surely, if her conspiracy-mongering was so toxic and dangerous, the Democrats could have found someone to run against her?

The party’s blandishments have clearly had some effect, as House Minority Whip Steve Scalise (Louisiana) and GOP Conference Chair Liz Cheney (Wyoming) have publicly denounced their Georgia colleague and pleaded for McCarthy to do the same. He has promised to “have a conversation” with her about the comments.

But it’s hard to see a route toward removing Greene from Congress legitimately, given that a two-thirds House majority would be required and there is no precedent for using lawmakers’ statements before being elected. Then again, no calls for an actual democratic process to remove Greene have surfaced. Instead, there’s Gomez’s resolution, New York Democratic-socialist Rep. Alexandria Ocasio-Cortez’s pointed comments about “white supremacists” and QAnon, and Parkland survivor turned spoiled-child anti-gun activist David Hogg literally ordering McCarthy to strip Greene of her committee posts.

The media’s unhinged obsession with Trump only made him stronger, convincing his followers he really was under attack by an unelected Deep State determined to stop him from enacting his agenda. Greene, her backers incensed by what they believe is that same system’s attempt to shred her, appears to be following in his footsteps. Rather than embark on a tiresome apology tour every time Media Matters dug up a new social media post, Greene shut down CNN’s pearl-clutchers last year after they accused her of spreading conspiracy theories. Rather than issue a point-by-point denial of all the thoughtcrimes the outlet had accused her of, she embraced the attacks as a “badge of honor.”

And to avoid those ordinary people getting even a foothold of control over their political future, the ruling class is pulling up every ladder, no longer even pretending average Americans can hoist themselves up by their bootstraps and enjoy a better life than their parents’ (or serve in government, for that matter). The same smug oligarchs who urged anyone banned from social media to “create your own platform” only to kill Parler, who urged those shut out from the financial system to “make your own market” only to ban trading certain stocks on Robinhood, are now daring downtrodden Americans to construct their own political system. As the nation saw on January 6, those who’ve been excluded from the political system are willing to call the oligarchs’ bluff.