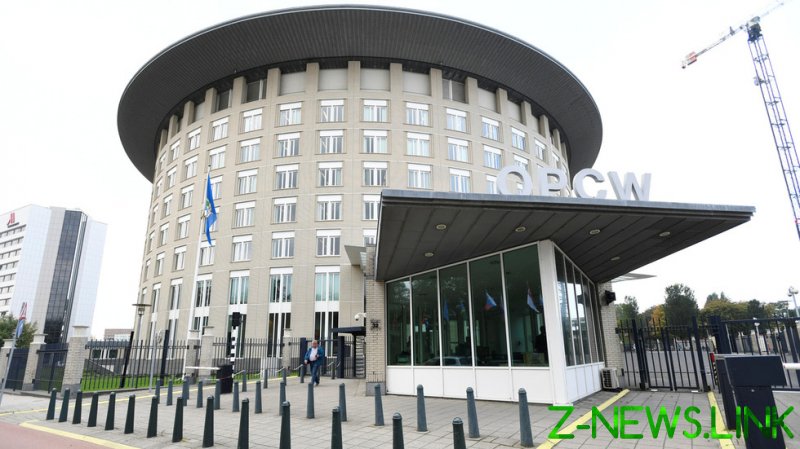 A new statement from whistleblower-supporting organization the Courage Foundation complains that the leadership of the Organization for the Prohibition of Chemical Weapons (OPCW) has failed to properly address accusations of a coverup involving the alleged chemical weapons attack in Douma, Syria in April 2018.

Instead it tried to “side-step the issue” entirely by targeting directly and apparently indirectly the whistleblowers who brought their concerns about the integrity of the OPCW’s investigation of the incident into public view.

“We believe that the interests of the OPCW are best served by the Director General [Fernando Arias] providing a transparent and neutral forum in which the concerns of all the investigators can be heard as well as ensuring that a fully objective and scientific investigation is completed,” the group said.

Arias should “find the courage to address the problems within his organization relating to this investigation and ensure States Parties and the United Nations are informed accordingly. In this way we hope and believe that the credibility and integrity of the OPCW can be restored.”

The Douma incident happened in a jihadist-controlled neighbouhood of Damascus, which was on the cusp of being captured by the Syrian government forces at the time. The predominant narrative about it in the Western media was that the Syrian army deployed chlorine gas by dropping canisters from a helicopter, killing scores of civilians as a result. The US, the UK and France launched barrages of missiles at Syrian government targets days later in retaliation for the purported atrocity.

The OPCW’s final report on the incident, published in March 2019, all but confirmed justification for the Western attack. But evidence which has mounted since points to possible political meddling in the organization’s work. Evidence collected by OPCW inspectors on the ground, which contradicted the theory of a government attack in Douma, had been apparently suppressed so that the conclusions reached in the final report would not be undermined.

The Courage Foundation, which seeks to protect and encourage whistleblowers, became involved in the incident early on. It helped convene a panel of experts, including Bustani, the former OPCW director, to assess the evidence and testimonies of two original sources of the coverup allegation. In October 2019, it made public its concerns over what the experts had found and called for a transparent and neutral inquiry.

The new statement lists a number of developments that have happened since. Bustani, for example, was barred from speaking at the UN Security Council by representatives of the very same member states that attacked Syria after the Douma incident. Investigative outfit Bellingcat made a dubious attempt to smear one of the whistleblowers, Brendan Whelan, with a never-sent draft letter addressing him. And the BBC gave a platform to an anonymous source, who was said to be working for the OPCW and apparently sought to discredit the dissenting inspectors.

The OPCW itself dismissed them as rogue and untrustworthy individuals, who violated the organization’s rules by leaking internal documents and had no full picture of what had happened in Douma. It also refused multiple calls by the scientists and their supporters to put all the scientific data underlying its final report forward for independent scrutiny. The Courage Foundation says the OPCW is only hurting itself, casting doubts on all other reports it produces.