Home / WORLD / ‘One of the best’ fossil finds named

‘One of the best’ fossil finds named 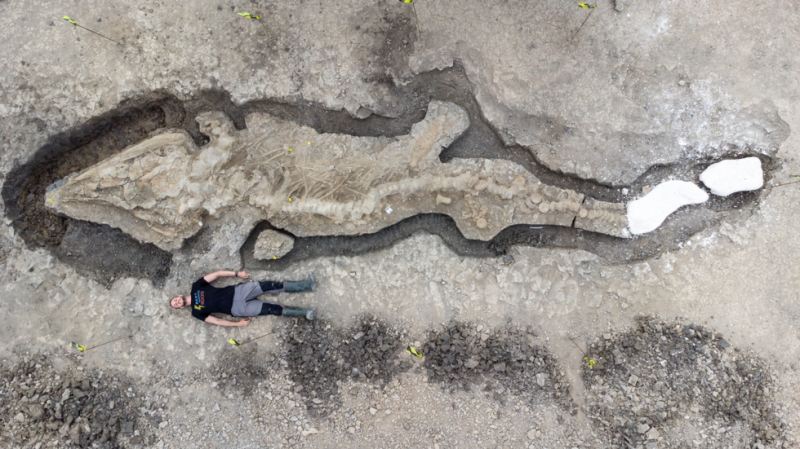 Paleontologists in the UK have unearthed the fossils of a giant prehistoric ‘sea dragon’ known as an ichthyosaur. The 32-foot (9.8-meter) skeleton is thought to be the largest and most complete set of fossils found in the country.

The specimen, which was found at the bottom of a reservoir last year, has been described as a “truly unprecedented discovery” and “one of the greatest finds in British paleontological history.” The six-foot plus skull of the animal alone has been weighed at a ton.

Although often miscategorized as swimming dinosaurs, these carnivorous marine reptiles are understood to have evolved from unknown land reptiles long before the first dinosaurs emerged. Generally resembling dolphins in body shape, the largest species of ichthyosaur could grow to more than 65-feet in length.

The specimen is believed to belong to a species called Temnodontosaurus trigonodon, but testing will reveal if it might have been a member of an as-yet undiscovered branch. It was discovered during landscaping works in February 2021. A lagoon on the Rutland Water reservoir was then drained and dug out in September. 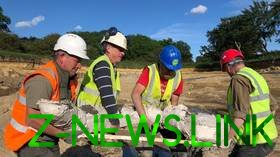 “When the paleontologists and our team uncovered the full skeleton and lifted it out using a tractor with a loader, the head was as large as me, and I am six-feet tall. It’s a tremendous beast,” Joe Davis, whose team found the specimen, told the Daily Mail.

Davis, a conservationist with the Leicestershire and Rutland Wildlife Trust, said the team initially “thought the ridges we saw at the muddy bottom of the reservoir were probably just pipes.” But Dean Lomax, an expert on ichthyosaurs who worked to excavate the fossil, described it as “one of the greatest finds in British paleontological history.”

Terming the UK as the “birthplace of ichthyosaurs,” Lomax told the BBC that the animals’ fossils have been “unearthed here for over 200 years,” and confirmed that the Rutland specimen was the largest found in the country to date.

In the 1970s, two incomplete skeletons of much smaller specimens were discovered when the Rutland reservoir was being constructed.