Home / WORLD / On Presidents Day, a crowd of supporters turns out in Florida to cheer Trump (VIDEO)

On Presidents Day, a crowd of supporters turns out in Florida to cheer Trump (VIDEO) 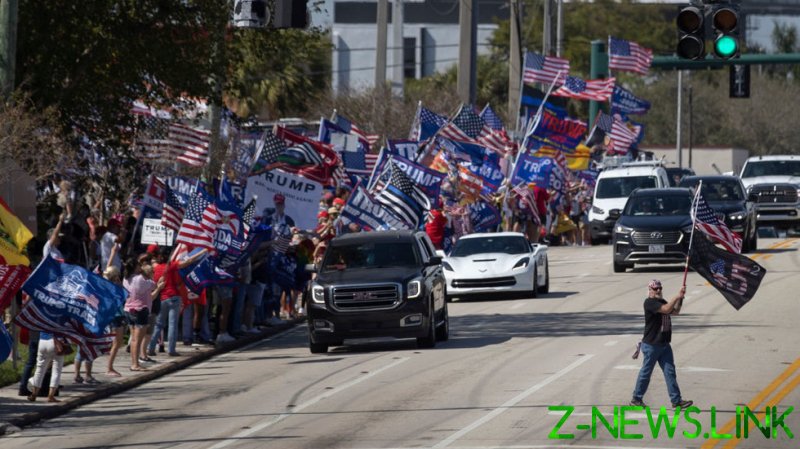 It was Trump’s name and not Biden’s that trended on social media Monday, as Americans observed a federal holiday inspired by their first president, George Washington. That was even before videos of a substantial crowd lining the road to Trump’s resort in West Palm Beach, Florida began to appear.

Dubbed the “Presidents’ Day ‘Peaceful and Patriotic’ Pro-Trump Rally,” the event started just before noon on Monday and lasted for more than three hours. Right Side Broadcasting Network (RSBN), which livestreamed the rally, captured the moment Trump drove past and gave the crowd a “thumbs-up” gesture as they chanted “We love Trump!” and “U-S-A!”

It wasn’t just Trump’s staff and alternative outlets who waxed nostalgic for the 45th president, however. Multiple outlets reported on the West Palm Beach rally, while the Hill tweeted out a video showing Trump golfing at his resort.

This was a rare public sighting of the former president since he flew to Mar-a-Lago on the morning of January 20, skipping Biden’s inauguration festivities.

He was invited by House Democrats to testify at his impeachment trial last week, but declined, describing the whole process as an unconstitutional political stunt persecuting a private citizen. On Saturday, the Senate fell short of the votes needed to convict him.