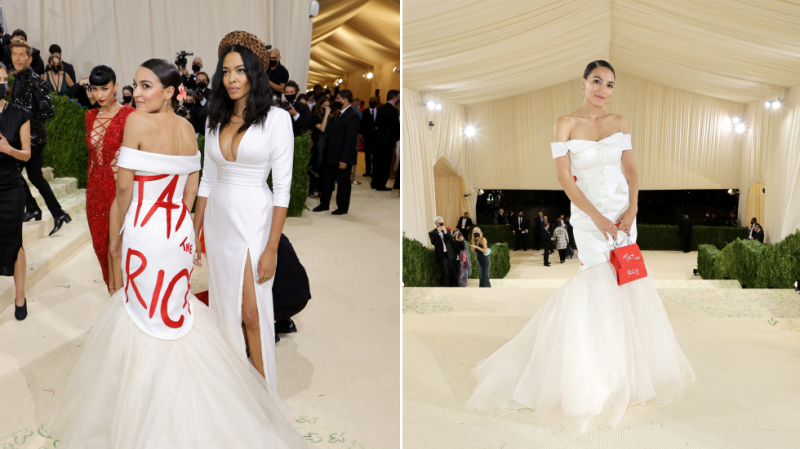 The Democratic congresswoman from New York attended the star-studded event at the Metropolitan Museum of Art in New York City on Monday. Tickets for the annual charity event reportedly went for at least $35,000 a head – which added to the debate over her choice of wardrobe.

Speaking to the press, Ocasio-Cortez said she wore the dress at an event that is mainly frequented by celebrities and the very wealthy so as to “bring all classes into the conversation” around “supporting working families” and “having a fair tax code”.

In a red carpet conversation with Vogue, she spoke about “what it means to be working class women of color at the Met” and expressed hope that the dress would be a conversation starter.

“We can’t just play along, but we need to break the fourth wall and challenge some of the institutions. While the Met is known for its spectacle, we should have a conversation about it,” Ocasio-Cortez told the fashion magazine.

The dress did kickstart discussion among social-media users over whether the outfit was out of place at the glitzy event with Republican congressional candidate Tina Ramirez branding it as “obscenely out of touch” and “completely hypocritical”.

Meanwhile, Donald Trump Jr. wondered whether she was a “bigger fraud” for wearing the dress “while she’s hanging out with a bunch of wealthy leftwing elites” or for apparently not wearing a facemask “after spending the past 18 months as one of the biggest authoritarian mask Karens in the country”.

Several commenters noted that Ocasio-Cortez had “diminished the message” she wanted to convey and came across “like she wants attention”, but others countered that she was “speaking truth to power”.

In posts on her Twitter and Instagram accounts, Ocasio-Cortez noted that the “medium is the message” and defended both her attendance at the event and the outfit against the “haters”.

She said that elected officials are “regularly invited to and attend the Met due to our responsibilities in overseeing our city’s cultural institutions that serve the public”.