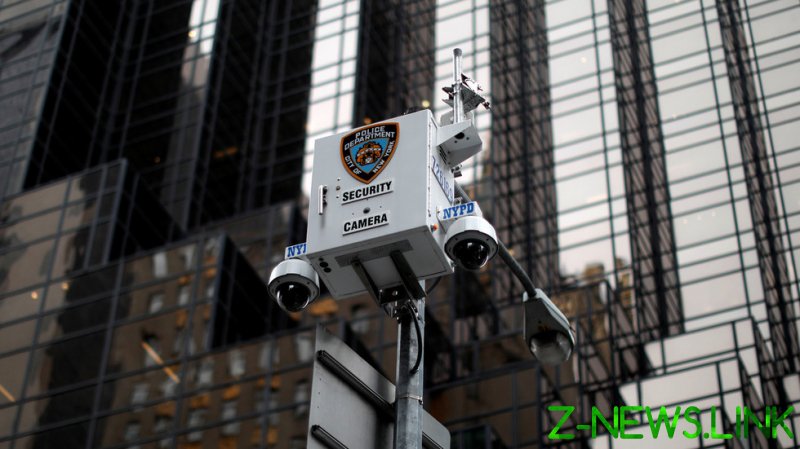 The NGO enlisted thousands of volunteers to hunt for cameras at intersections in Manhattan, Brooklyn, and the Bronx, in an effort to document the size and scope of the New York Police Department’s surveillance capabilities. In total, 15,280 cameras were located. When synced with facial recognition technology (FRT), the cameras are capable of tracking New Yorkers across all three boroughs, Amnesty said.

FRT works by comparing camera imagery with the images of millions of faces stored in a database, many of them taken from sources such as social media without users’ knowledge.

As part of its report, the group also released a video modeling the “extensive field of vision” of New York’s CCTV network. It’s believed the NYPD can use the cameras to track faces as far as 656 feet (200 meters) away – the equivalent of two street blocks.

Commenting on the findings, Dr Matt Mahmoudi, an artificial intelligence and human rights researcher at Amnesty International, said the vast network of cameras means you are “never anonymous” when walking through the city.

This sprawling network of cameras can be used by police for invasive facial recognition, and risks turning New York into an Orwellian surveillance city.

The report noted that the NYPD has used FRT in 22,000 cases since 2017. According to Amnesty, it has exacerbated racially discriminatory policing, and can also endanger civil liberties such as the right to peaceful assembly.

The network is a serious threat to privacy and can lead to racial profiling because it targets “certain individuals or groups of people based on characteristics, including ethnicity, race, and gender, without individualized reasonable suspicion of criminal wrongdoing,” Mahmoudi explained. He added that, due to a lack of publicly available information about the NYPD’s surveillance practices, it’s “impossible” for New Yorkers to know “if and when their face is being tracked.”

The NYPD’s policing tactics were recently scrutinized, after the force began using a robotic ‘dog’ to assist with operations. The robot was retired from duty in April because New Yorkers complained it was “creepy.” Mayor Bill de Blasio said at the time that the robo-canine “sent the wrong message,” amid concerns about the NYPD becoming increasingly militarized.