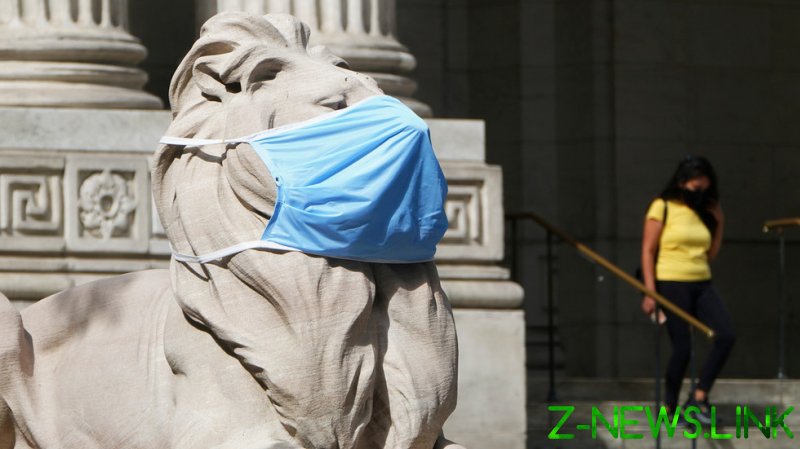 The mayor warned those who dare to move around the city bare-faced that his “mask patrols” would be prowling nine so-called “hotspot” zip codes looking for violators. Nearly 1,000 cops, contact tracing workers, and other city staffers will be empowered to warn, fine, and ticket the unmasked in areas where the percentage of positive Covid-19 tests has recently approached or exceeded 3 percent.

While they’ll be handed a free mask at first, repeat offenders will be slapped with tickets carrying $1,000 fines – an outrageous sum during a recession. Worse, the mayor has warned that if the case numbers keep climbing – the city averaged 3.25 percent positive case rate as of Tuesday – he will begin shutting down businesses again. This would be a truly nightmarish scenario for a city that still hasn’t reopened some industries.

Further adding insult to injury, the mask brigades are being deployed right as New York is finally allowing restaurants to invite customers inside – if only at 25 percent capacity. It’s not clear whether these coronavirus cops will actually be entering restaurants or other establishments hunting mask scofflaws, but if they do, it would make an utter mockery of the 25 percent capacity rule.

Many of the “hotspot” neighborhoods also happen to have large Orthodox Jewish populations, a factor which is bound to reflect poorly on a mayor who’s already been attacked for appearing to target Hasidic populations with his Covid-19 enforcement. Can you say “mask gestapo”? You’ll probably be hearing it a lot in a few weeks.

The rollout of the mask troopers will be accompanied by a testing blitz, making the nine “hotspots” themselves a self-fulfilling prophecy – any increase in testing is guaranteed to uncover more cases, and if the city continues to use the woefully-flawed PCR testing method, many of those “cases” will be false positives. Even the New York Times admitted weeks ago that 90 percent of individuals who test positive by the PCR method probably carry too little of the virus in their bodies to transmit it to others – yet their numbers are still counted as “cases” and used to fuel the pandemic hype that has plunged New York City into an economic depression from which it may never recover.

Nearly 9 in 10 New York restaurants couldn’t pay their full rent in August, according to a survey earlier this month by the NYC Hospitality Alliance – up from 80 percent in June. Broadway and other theaters remain closed, as do music venues, by order of New York Governor Andrew Cuomo – an extra sprinkling of sadism for the hundreds of thousands of New Yorkers who work in these industries. Museums and galleries have only just reopened – not a problem for well-funded institutions like the Met and MoMA, but likely spelling doom for dozens of smaller operations.

Even the city’s vaunted 24-hour subway system now shuts down at 1am, sending outer-borough residents fleeing for the exits at the appointed hour like Cinderella worried her coach will turn into a pumpkin. While this measure was supposedly adopted to clean the trains during the pandemic, the city was perfectly capable of cleaning the trains on a staggered basis in the past without shutting down the whole system, and a recent study confirmed there is no link between subway use and Covid-19 transmission. It’s just spitting in the face of those who have to work late nights – often those least likely to be able to afford cab fare. The city that never sleeps now has a hard-and-fast bedtime.

All the things that make New York special have essentially been destroyed in a systematic fashion in the name of keeping residents safe, but New Yorkers will only put up with so much. When de Blasio asked residents to snitch on their neighbors violating social distancing to a designated tip line, the system was so flooded with dick-pics and obscenities that it crashed. If the mayor tries to compound the city’s woes by sending 1,000 shock troops through residential neighborhoods to check on mask compliance, he might find he’s pushed us too far.