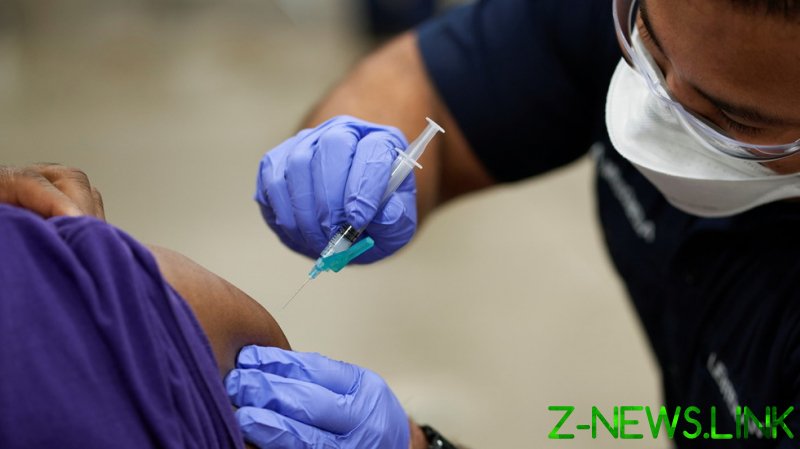 The Houston Methodist hospital system said its employees must take the shot by June 7, making it the first healthcare provider to issue a mandate, stiffening its rules after previously offering $500 to any worker who received the inoculation voluntarily. Those who decline may be fired.

“Mandating the vaccine was not a decision we made lightly, but science has proven that the Covid-19 vaccines are very safe and very effective,” said Houston Methodist CEO Marc Boom in a message to staff reported by CBS News on Friday.

By choosing to be vaccinated, you are leaders – showing our colleagues in health care what must be done to protect our patients, ourselves, our families and our communities.

Consisting of a medical center and six community hospitals, Houston Methodist may soon be joined by other Texas healthcare facilities, with Boom noting that the Memorial Hermann hospital and Baylor College of Medicine have concrete plans to follow suit, and that “countless” others around the US are now considering the move.

A majority of workers at Houston Methodist have already been vaccinated, or around 89% as of Friday. Of the hospital network’s 1,200 managers, who were given an earlier deadline of April 15, two decided to leave their positions – later criticized by Boom for “putting themselves before the safety of our patients.”

The rule-change has prompted some pushback, however, with Houston Methodist nurse Jennifer Bridges launching an online petition against it last week, garnering more than 3,100 signatures by Friday evening.

“If you want the vaccine that is great but it should be your choice. It should not be forced into your body if you are not comfortable with it!” the petition says.

Many employees are scared that they will lose their job or be forced to inject the vaccine into their body against their will to keep their jobs and feed their family. We just want the power to choose for ourselves…

Bridges later told the Houston Chronicle that she would only take the immunization once it received full FDA approval, potentially a years-long process.

“We’re not against the vaccine, we just want to be more comfortable with this one and have thorough research out before we take it,” she said. “When patients get care, they have the right to refuse treatment, but we’re not allowed that same exemption.”

To date, three coronavirus vaccines have been approved in the US, developed by Pfizer-BioNTech, Moderna and Johnson & Johnson, all under the FDA’s Emergency Use Authorization (EUA) rules.

However, as Houston Methodist moves ahead with the requirement, some question remains as to the legality of vaccine mandates. While the Equal Employment Opportunity Commission determined last December that workplace vaccine requirements would not violate the American Disabilities Act, there is less clarity about whether they would conflict with other guidelines from health agencies, namely the FDA’s rules for drugs approved on an emergency basis.

Under the EUA provision passed by Congress in 2004, vaccine recipients must be given the “option to accept or refuse administration” of the drug or product in question, and be informed of the “consequences, if any, of refusing.” Though that would appear to rule out mandates altogether, no court has interpreted the measure, and there is ambiguity around the use of the term “consequences.” The language could be read to refer to ‘consequences’ directly related to an employee’s health, or, more broadly, to include any adverse actions that could be taken by an employer if a worker refused to take the shot, such as being fired.

The American Disabilities Act does make some exemptions for employees, such as those with disabilities or religious convictions that preclude taking a vaccine. It also does not permit employers to summarily fire workers who decline to be vaccinated, requiring them to seek “reasonable accommodation” first, though ultimately allows termination if none can be reached.

The CDC, meanwhile, has done little to clarify the issue, saying only that coronavirus vaccine requirements in the workplace are “a matter of state or other applicable law.” The agency did note, however, that employers cannot force workers to hand over sensitive medical information to prove they had been vaccinated.

While Houston Methodist is the first hospital in the US to require the shot for employees, ‘vaccine passports’ – or special cards or phone apps that allow recipients to prove they have been vaccinated to gain entry to public spaces – have been likened by critics to de facto mandates that threaten to exclude citizens from social life.

State governments in New York and Hawaii have already implemented their own passes, but similar projects have faced fierce opposition elsewhere. So far, at least six states have restricted or banned vaccine passes altogether by way of executive order or legislation, with Indiana likely to become the latest after state lawmakers passed such a measure on Thursday.