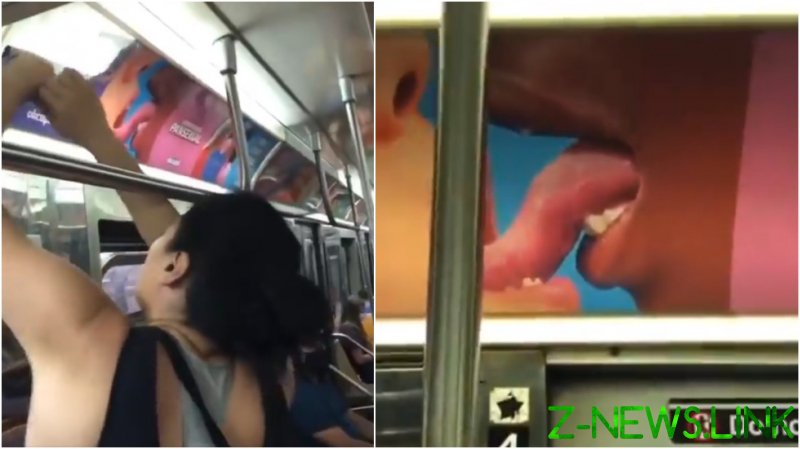 A video of the incident, which made the rounds online on Wednesday and Thursday, begins with the woman ripping down a provocative ad for the dating app OKCupid. “All this is gross, all this is gross,” she told other passengers. “I don’t know, for kids to be looking at this, is that OK?”

A fellow passenger filming the rant replied, “No it’s not, it’s wrong” as the woman added, “It’s propaganda. It affects the next generation. I don’t know why, like, no one sees this. This is disgusting.”

A male straphanger agreed, calling the ads “desensitization,” while another passenger said they are “normalizing” abnormal behaviors.

The woman then resumed tearing down the advertisements, most of which were for the popular digital dating platform. Many of the ads were sexually explicit or suggestive, such as one promoting the app using a picture of two mouths with a single tongue connecting them. Another ad targets “every single pansexual,” while yet another refers to “every single non-monogamist,” accompanied by an image of a group of people making out on a bench.

Other ads in OKCupid’s latest campaign include heavily politicized statements such as, “It’s OK to choose Mr. Right based on how far he leans left,” “It’s OK to only date someone who’s pro-choice,” and – seemingly at odds with the sentiment of the previous two – “It’s OK to have strong convictions and abandon them for the night.”

In the viral video, the ad-defacing woman argues that the messaging is a form of social engineering. “They’re trying to divide and conquer us. The government is against us, and you guys don’t see it,” she said.

OKCupid has promoted itself as offering 22 gender options and 12 sexual orientations for user profiles. A new feature introduced on the app this week also enables users to declare their pro-abortion views with a special badge on their profiles.

The woman also vented about ads promoting Covid-19 vaccines. “You guys think you can get the vaccine and this is going to go away?” she asked. “It’s never going to go away unless we the people say we don’t want this anymore.”

She then targeted an ad for clothing retailer Old Navy promoting “body equality,” insisting “It’s not about equality guys. It’s about communism.”

The woman filming the tirade told other passengers, “Watch and learn. That’s what bravery looks like, saying no to propaganda.”

The approving male passenger, who helped tear down some of the signs, agreed, saying, “They’re coming for your children folks.”

Conservative commentators praised the woman for being “unbelievably based” and rejecting what they saw as divisive propaganda. “Someone get this woman a mic and start her streaming ASAP,” one commenter tweeted.

Graphic designer Erika Ann Christensen said that if the woman got in trouble for destroying the ads, “I would pay her bail. Save America.”

Critics of the women’s very public revolt against OKCupid’s ad campaign accused her of vandalism and destroying private property, calling her “deranged.”

“If she doesn’t like that, then she should get involved to change the policy not destroy property,” one observer argued.

Another said that while they can relate to the woman’s message, the method she chose to express her disgust with the ‘woke’ agenda may have crossed a line.

“I agree with her sentiment 100%. I’d just be reluctant to destroy property,” one commentator said.