Home / WORLD / ‘No, you apologize’: After getting lectured for comparing Covid mandates to Nazi Gestapo, Jewish Republican FIRES BACK at ADL

‘No, you apologize’: After getting lectured for comparing Covid mandates to Nazi Gestapo, Jewish Republican FIRES BACK at ADL 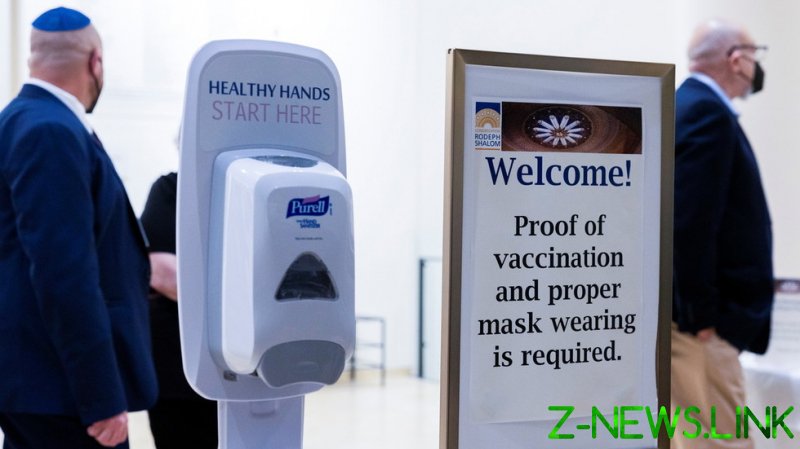 “Being asked to wear a mask or take an FDA-approved vaccine is not equivalent to the actions of the Gestapo in Nazi-era Germany or the systemic annihilation of an entire group of people,” the ADL tweeted on Friday, adding that such “comparisons are beyond the pale and need to stop” and calling on Mandel to apologize.

“I will not stop. I will not apologize,” the Senate candidate fired back. “It’s you and kapo [Jonathan Greenblatt] that should apologize,” he added.

Greenblatt is a former Barack Obama aide who is currently the national director of the ADL, while Kapo is the term for concentration camp inmates charged with enforcing the Nazi’s rules against others, and is widely considered one of the worst insults from one Jew to another.

The ADL was following the lead of the American Jewish Committee, which on Thursday called Mandel’s reaction to Biden’s announcement of vaccine mandates “disgraceful” and “hateful.”

The former Ohio state treasurer, who seeks to replace Senator Rob Portman in 2022, had tweeted a video message urging Americans not to comply with Biden’s mandates.

“Do not comply with the tyranny, and when the Gestapo show up at your front door, you know what to do,” he said.

Biden has ordered the Department of Labor and the regulatory agency OSHA to fine businesses with 100 or more employees who do not mandate vaccination or weekly testing, arguing that this will “reduce the number of unvaccinated Americans” whose refusal to take the Covid-19 jab is allegedly endangering those who did.

“We’ve been patient but our patience is wearing thin, and your refusal has cost all of us,” Biden said, adding that Americans are growing “angry” and “frustrated” at the 80 million people who have opted not to take the vaccine.

A number of Republican governors, lawmakers and candidates have denounced Biden’s mandate as unconstitutional and tyrannical. Meanwhile, more than a few pundits have taken issue with the president’s rhetoric, calling it divisive, incendiary and scapegoating of the “unvaccinated.”

Jordan Schachtel, an independent journalist critical of the Covid-19 lockdowns, actually quoted literature from the US Holocaust Memorial Museum to show how Nazi Germany dehumanized Jews as disease carriers and used measures against the typhus epidemic as a pretext to create ghettos, quarantine and “disinfection” facilities.

This is not the first time that restrictions imposed in the name of fighting the coronavirus – from lockdowns to vaccine passports – have been likened to those in Nazi Germany, but the ADL and AJC have been more successful in shutting them down.

Back in May, Congresswoman Marjorie Taylor Greene (R-Georgia) said mask rules and vaccine requirements were creating “second-class citizens” just as the yellow stars the Jews were forced to wear in the Third Reich. She publicly apologized the following month, after a visit to the Holocaust Museum in Washington, saying that her remarks were offensive and that “there is no comparison to the Holocaust.”