Home / WORLD / ‘No good deed goes unpunished?’ Chelsea Manning & Glenn Greenwald launch tweet-salvos at each other in a row nobody saw coming

‘No good deed goes unpunished?’ Chelsea Manning & Glenn Greenwald launch tweet-salvos at each other in a row nobody saw coming 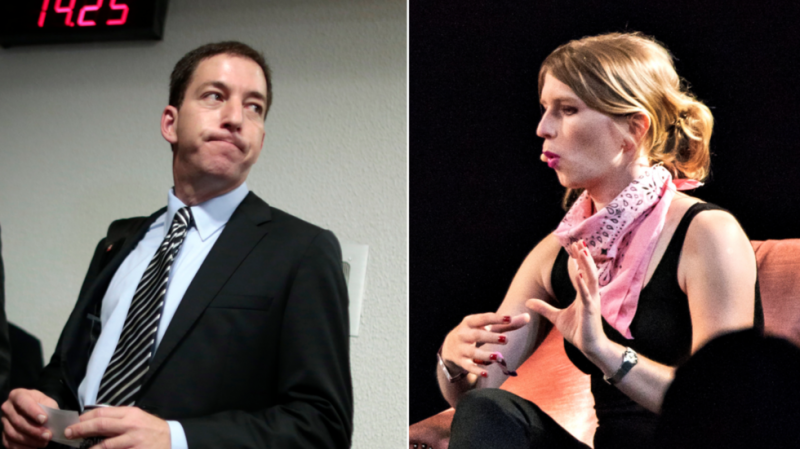 Former army intelligence analyst Manning launched a seemingly-unprovoked Twitter attack on Greenwald on Thursday, calling him “greedy, unprincipled,” and someone she was “embarrassed” to have called a friend. The investigative journalist, Manning implied, had “chosen to bash, harass, humiliate, intimidate, and lie to get ahead.” She added that if she could return the $10,000 donation Greenwald had once sent her in a time of need, she would.

Greenwald initially said Manning “didn’t specify any critique,” and that her post amounted to “smear artist conduct.” However, in a series of tweets, he then made some clear suggestions as to what might explain the sudden drama. Greenwald’s thread started with him denouncing “friendships that depend on political agreement,” which he called “cynical transactions,” while reminding his 1.6 million followers that he stood by Manning during her trial and imprisonment and fundraised for her. Manning spent seven years in military prison over the leaking of evidence of US war crimes in Iraq, such as the iconic ‘Collateral Murder’ video published by WikiLeaks. She was then ordered back to jail over the refusal to testify against WikiLeaks and its co-founder, Julian Assange, and was finally released in March 2020.

However, Greenwald’s thread suggests that the rift between the two appeared even before Manning’s second stint behind bars. In a screenshot of private messages Greenwald posted on Thursday, Manning apparently denounced his appearances on Tucker Carlson’s show on Fox, calling Carlson a “nazbol demagogue” – a portmanteau of ‘national’ and ‘Bolshevik’, which can nowadays refer to both the extreme far-left and extreme far-right. She insisted Greenwald was “really off the mark” in accepting invitations to appear on the popular TV show.

“Lots of people on the left – not all, but many – mistake friendships for political agreements, such that when the political agreement erodes, for them the ‘friendship’ does, too,” Greenwald wrote, before reflecting on “what left-liberal spaces have become.”

“They all turn on each other, denounce each other, repudiate one another. Their currency is this form of self-victimizing grievance,” he wrote. Greenwald also noted that Manning took an apparent swipe at Assange in June, telling the Intercept’s Ken Klippenstein she would rather have leaked the classified materials to him, had he been around at the time. Greenwald quit the Intercept in October 2020 citing lack of editorial freedom. He said that the investigative outlet, which he co-founded, refused to publish his article on then-Democratic presidential candidate Joe Biden unless parts of the story critical of Biden were removed.

While Manning herself didn’t announce the specifics of her grievances against Greenwald to the public, apart from a vague suggestion the journalist “hurt” some of the people she knew, Manning’s followers were quick to supply their own reasons, running the gamut from a lack of sympathy or understanding of the trans experience to “he’s vicious.”

But most others seemed to suspect it was Greenwald’s apparent shift rightward from the perspective of liberal critics that had caused the rift, mentioning either his Fox News appearances, his high-profile move to the video platform Rumble (used by many who have been kicked off YouTube and other mainstream platforms), his decision to abandon the Intercept for its refusal to allow meaningful criticism of Joe Biden, and his general voicing of opinions critical of Democrats, neo-liberals, and ‘the woke’.

Greenwald hit back, noting that such “public denunciation rituals” were simply “the way you get clout and applause on the left.”

However, this retaliation soon became fodder for his usual critics, and as the row began trending on Twitter, the site’s trends section showed messages almost exclusively critical of Greenwald, calling him cruel, narcissistic, and unprincipled.

Some wondered why the two couldn’t just get along, or why they were fighting in the first place, while others suggested that such infighting had sadly become commonplace on both ends of the political spectrum.