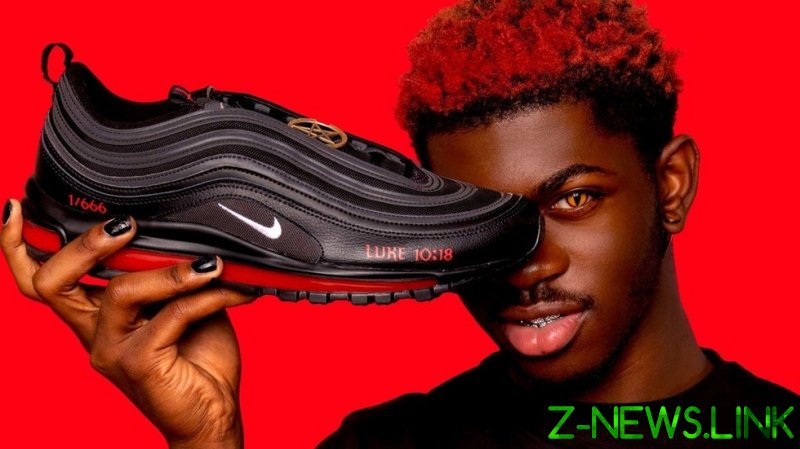 A lawsuit citing trademark infringement and dilution, false designation of origin, and unfair competition was filed in the US District Court for the Eastern District of New York on Monday afternoon.

Nike sought a preliminary and permanent ban of MSCHF (“mischief”) from “manufacturing, transporting, promoting, advertising, publicizing, distributing, offering for sale, or selling any products” under Nike’s marks or “any marks substantially indistinguishable therefrom,” along with monetary damages.

At the heart of the controversy is a limited run of 666 Nike Air Max ‘97 sneakers, whose air bubble was filled with red ink and “one drop of human blood,” according to a promotional tweet that went viral on Friday. They appear to be a collaboration between the Brooklyn-based MSCHF and rapper Lil Nas X, to cross-promote his latest video in which he “rides a stripper pole into hell and gives the Devil a lap dance.”

Nike’s public relations department has spent much of the weekend insisting they are in no way affiliated with MSCHF or their product – just as they weren’t involved in the 2019 ‘Jesus Shoes’ stunt in which MSCHF sold the same type of sneakers filled with holy water instead.

In the 24-page complaint, the company’s lawyers said that Nike has faced calls for boycott “based on the mistaken belief that Nike has authorized or approved this product” and included screenshots of negative comments on social media, including several users saying they “never want to purchase any Nike products in the future.”

Nike blames MSCHF for wanting to “capitalize on Nike’s valuable reputation and customer goodwill” by using its trademarks in a way “likely to cause consumers and potential customers to believe that MSCHF’s Satan Shoes are associated with Nike, when they are not.”

In addition to barring MSCHF from making any more of the shoes, Nike is asking the court to order the company to deliver for destruction any of the shoes and other “items in any of their possession, custody, or control bearing Nike’s marks.”

That amounts to closing the barn doors after the proverbial horses have bolted, however, as all of the ‘Satan Shoes’ that cost $1,018 apiece have reportedly been sold already.

MSCHF is based in the Williamsburg neighborhood of the New York borough of Brooklyn, known as the hipster capital of the US, and specializes in limited runs of random customized products that defy definition.

“Our perspective is everything is funny in a nihilistic sort of way,” founder and CEO Gabriel Whaley told Business Insider in a January 2020 profile. “We’re not here to make the world a better place. We’re making light of how much everything sucks.”