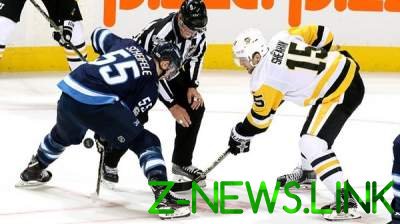 Over the ocean in the middle of the regular season 101st season in NHL history.

The reigning champion of NHL “Pittsburgh” at the start of the season far from their best form. On Sunday, the Penguins managed to miss seven goals from the average “Winnipeg”. Blake Wheeler (1+2) entered the history of the jets, as the first hockey player, who managed to make a hat-trick in the first period. In the defeat of the “Pittsburgh” actively participated and mark Cheifly (1+2). “Penguins” for 13 matches conceded 50 goals, which is the worst record in the League.

“Washington” on departure has not coped with “calgary”. The key moment of the match came in the 50th minute, when the hosts forward Sean Monahan scored the sixth goal of the season and brought his team to sixth win in 12 matches.

“Anaheim” in the penalty shootout put the squeeze “on Carolina. “Daks” has won the fourth victory in last five matches and moved to fourth line in the Pacific division. First star of the match became the author of salvation for “Anaheim” pucks Jacob Silfverberg.