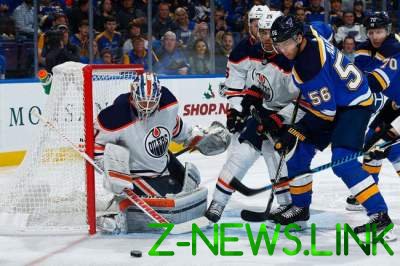 The next day the regular championship of NHL consisted of three matches.

The leader of the Western conference “St. Louis” on home ice mocked the crisis “Edmonton”. Vladimir Tarasenko scored 4 points (2+2) and was named first star of the match. High-scoring duel with the “oilers” was for Braden Shen (2+1) and Jaden Schwartz (0+3). “St. Louis” won the 16th win in 22 games of the season and moved into first place in the League in total points.

“Vancouver” confidently beat “Philadelphia” and was one step away from entering the area playoffs. The main hero of the match was Brock Boser – 20-year-old striker “Canucks” with the score 1:1 scored two goals and actually decided the outcome of the match. Philadelphia suffered its fifth consecutive defeat and dropped to 13th place in the Eastern conference.

“Dallas” struck “Montreal” fourth defeat in a row. To turn the tide of the match, “the Stars” managed at the end of the second period when Devin shore scored the second goal of the season and assisted on Jason Spezza. “Dallas” has risen on the fourth line in the Central division.