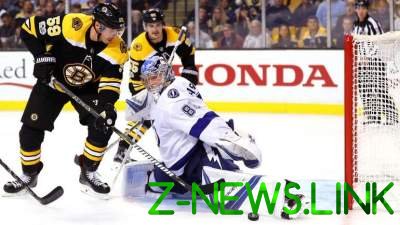 The next day the regular championship of NHL consisted of four matches.

“Boston” attacked “Tampa” third defeat in last four matches. The first star of the game was George McEvoy, who scored early in the match the third goal of the season and gave an assist on tori Krug. The “Tampa” 11th goal of the season was scored by Steven Stamkos.

“St. Louis” has failed to win in the home match with “Anaheim”. The main creators of the sensational victory of “DAX” steel goalkeeper John Gibson, who committed 37 saves, and Antoine Vermette, on account of which brace. Save the “St. Louis” tried Kyle Brodziak, however, two washers canadian Blues
was not enough to avoid an eighth defeat of the season.

See also:  "The clown on the ice": laugh over Putin-hockey player

Following the “Tampa” and “St. Louis” game day went bad for Winnipeg. Jets in overtime lost to Colorado and missed the chance to lead the Western conference. On 59-th second of extra time Nathan McKinnon scored the most and brought his team to a 12 win of the season.

See also:  Liverpool for a record amount was bought by the Dutch defender