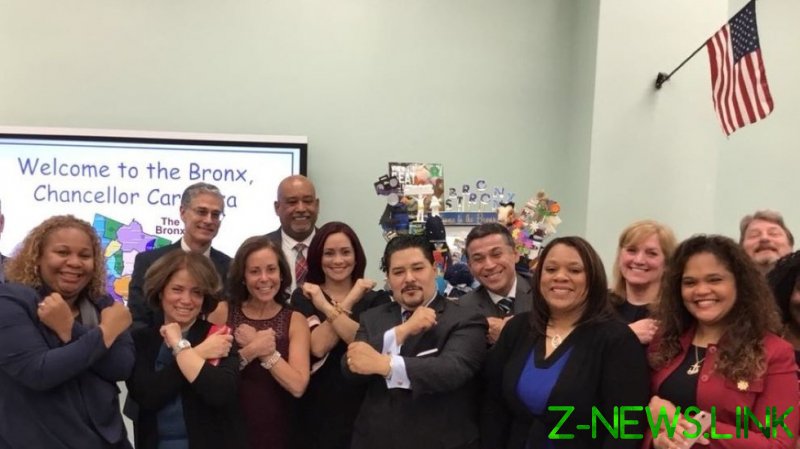 Meisha Ross Porter has been named head of the largest US public school system, becoming the first black woman in the role, after Richard Carranza announced his resignation as New York City Department of Education (DOE) chancellor on Friday. Porter will start her new duties on March 15, marking her second promotion in less than two years.

Porter’s last promotion, to Bronx executive superintendent, was reportedly celebrated at a $45,000 gala where she wore a tiara and her 400 guests, including DOE underlings, were required to pay $111 a plate. A new controversy involving Porter surfaced earlier this month, when two ex-superintendents alleged in lawsuits against the DOE that they were fired at least partly because they declined to participate in “Wakanda Forever” salutes — inspired by the movie “Black Panther” — which she directed at meetings with fellow administrators.

The salute, as popularized by the late actor Chadwick Boseman, involves crossing both arms across the chest with fists pointing upward. It’s a symbol of black empowerment and a gesture of solidarity with the mythical African country Wakanda, from “Black Panther.”

Former Bronx superintendents Rafaela Espinala and Karen Ames alleged in separate lawsuits — both filed this month and seeking a combined $190 million in damages — that the mandatory salutes were problematic because of their racial implications as a symbol of “black power.” Espinala said Porter often spoke of her father being a member of the Black Panthers, a militant civil-rights group.

The DOE has denied that it discriminated against any employees and said the Wakanda gestures were a symbol “used to represent the Bronx,” not black power.

Carranza was named as a defendant in both lawsuits, and Ames said he created divisions along the lines gender, age, race and ethnicity after taking charge as chancellor in April 2018 touting an “equity platform.” The DOE said he chose to resign of his own volition.

Carranza has generated controversy, largely for his leadership during the Covid-19 pandemic. He also joined with Mayor Bill de Blasio in ending merit-based admissions at the city’s elite public schools to help “redistribute wealth” and spur greater integration.

“We have stabilized the system in a way no one thought possible,” Carranza said in announcing his resignation on Friday. “The light is at the end of the tunnel. And I can’t think of anyone who would be better to lead this work and serve as New York City’s next chancellor than Meisha Porter.”