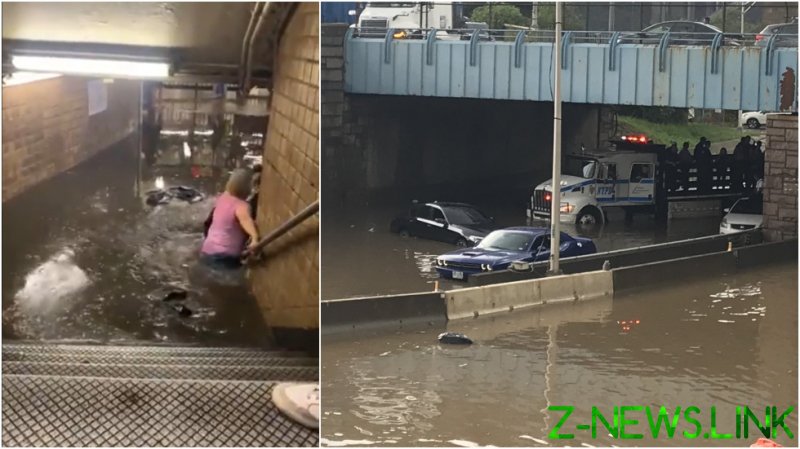 A soggy Thursday afternoon in the Big Apple saw residents wading through waist-deep water as they attempted to reach their subway platforms, while streets – including the Major Deegan Expressway – were crippled by the downpour. Numerous videos floating around social media captured the flooding.

New York’s Mass Transit Authority noted that crews are working to “address station flooding” and “clean up after today’s downpour,” and warned travelers not to enter the flooded terminals.

Casting that advice aside, a few dedicated commuters donned plastic garbage bags in a futile attempt to stay dry – which one observer dubbed the “potato sack race approach.” Some ‘racers’ were more successful than others.

Large sections of the Major Deegan were submerged in murky water, which was seen overtaking some vehicles. A stretch on the northern portion of FDR Drive was also nearly inundated, though some drivers managed to squeeze through.

With motorists left stranded by the floods, the NYPD dispatched its ‘strategic response group’ to make rescues, in one case using a large flatbed to ferry passengers to dry land.

The floods followed hours of thunderstorms on Thursday afternoon, with a flash flood watch set to remain in effect until Friday morning, as the deluge is expected to pick back up. Several New York boroughs are also under a flash flood warning, which suggests a more immediate threat, including the Bronx, Manhattan, Queens and Brooklyn, while a warning was also issued in nearby Fairfield County, Connecticut.