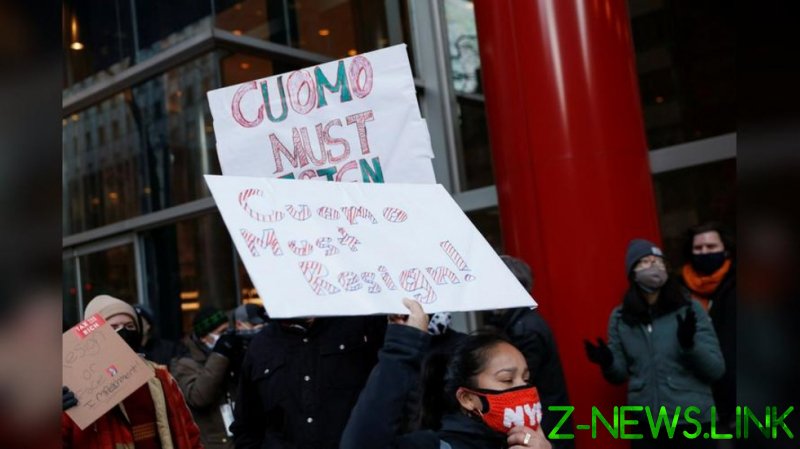 New York Senate Majority Leader Andrea Stewart-Cousins, who like Cuomo is a Democrat, said Sunday that with new accusers of Cuomo stepping forward seemingly every day and the governor embroiled in multiple scandals, focus is being drawn away from the business of government. “We need to govern without daily distraction,” she said. “For the good of the state, Governor Cuomo must resign.”

Assembly Speaker Carl Heastie, also a Democrat, agreed with Stewart-Cousins, saying, “We have many challenges to address, and I think it is time for the governor to seriously consider whether he can effectively meet the needs of the people of New York.”

The statements came after Cuomo continued to insist that he won’t step down from office, despite two more former staffers coming forward to accuse him of sexual misconduct. “I’m not going to resign because of allegations,” Cuomo told reporters in a telephone call earlier Sunday.

Cuomo’s office issued two statements late last month regarding the outside investigation of his conduct. In both cases, the statements ended with a vow that “We will have no further comment until the report is issued.” Nevertheless, he has repeatedly made statements about the allegations in the ensuing days.

While the harassment allegations have created the biggest firestorm, another scandal involving the governor has bigger consequences – life-and-death consequences. Cuomo aide Melissa DeRossa admitted last month that the governor’s office withheld data on New York’s Covid-19 death toll in nursing homes because the governor was under fire for a policy forcing such facilities to accept patients infected with the virus.

The New York Times and Wall Street Journal said on Thursday that Cuomo’s aides doctored a state Health Department report last July to understate the number of nursing home residents who died from Covid-19. The report was edited to count only the deaths that occurred in nursing homes, not the thousands of additional deaths involving residents of long-term care facilities who became ill and later died in hospitals.

The governor and his supporters then used the misleading data to tout a relatively low rate of nursing home deaths in New York. Cuomo brushed off criticism as politically motivated and found time during the crisis to write a book on his handling of the Covid-19 pandemic.

“Look at the basic facts where New York is versus other states,” Cuomo told reporters in August. “You look at where New York is as a percentage of nursing home deaths, it’s all the way at the bottom of the list.”

That was no longer the case after New York’s data was corrected to show its true nursing home death toll at more than 15,000, including about 6,000 lives that ended after the patients were moved to hospitals.