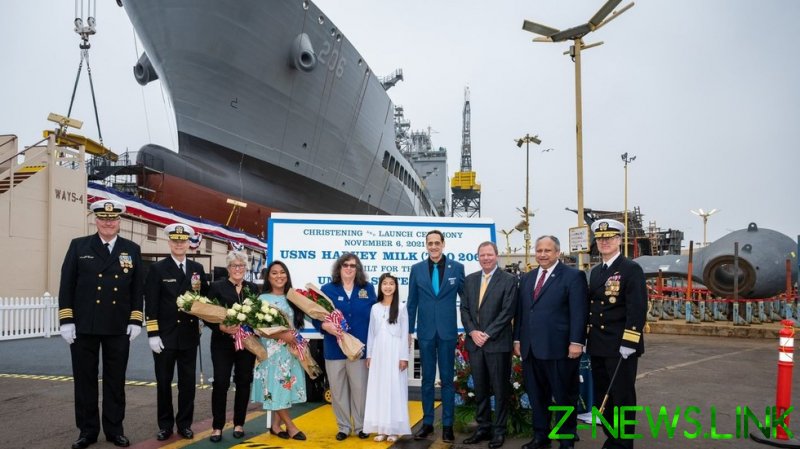 The USNS Harvey Milk was christened in San Diego, California in a traditional Navy ceremony, with Milk’s nephew, Stuart Milk, in attendance.

Milk, who became an American LGBT icon as the first openly gay official elected in the state of California, served in the US Navy in the 1950s before being discharged over his sexuality. Less than a year after he was elected to the San Francisco Board of Advisers, Milk was assassinated in November 1978 by fellow board member Dan White, who had clashed with Milk over city policy.

A bottle of champagne was smashed on the USNS Harvey Milk on Saturday in the traditional manner by transgender Navy veteran Paula M. Neira, who currently works as a director for the John Hopkins Center for Transgender Health and as an assistant professor for plastic and reconstructive surgery.

Though many Americans celebrated the moment as a landmark for LGBT rights, with California Congresswoman Sara Jacobs calling the occasion “a powerful symbol of inclusion and of our duty to welcome all people who serve,” others protested the decision to name a ship after Milk.

Republican Texas congressional candidate Chris Ekstrom called the ship’s christening “vile nonsense” and suggested that countries such as Russia, China, and Iran can “smell incompetence” from the US and are “coming.”

Others accused the Navy of being woke and called the celebration “embarrassing and morale-destroying,” with one American tweeting, “This is why other nations are laughing at us. This stupid ‘inclusive’ bulls**t… Focus on dropping bodies and striking fear into our enemies instead of this s**t.”

The USNS Harvey Milk is the first US Navy ship to be named after an openly gay American and is part of the John Lewis-class fleet of ships, which are all named after civil rights leaders. Other ships in the fleet are named after African-American civil rights leader John Lewis, former Supreme Court Chief Justice Earl Warren, former US Attorney General and Senator Robert F. Kennedy, and women’s rights activists and abolitionists Lucy Stone and Sojourner Truth.