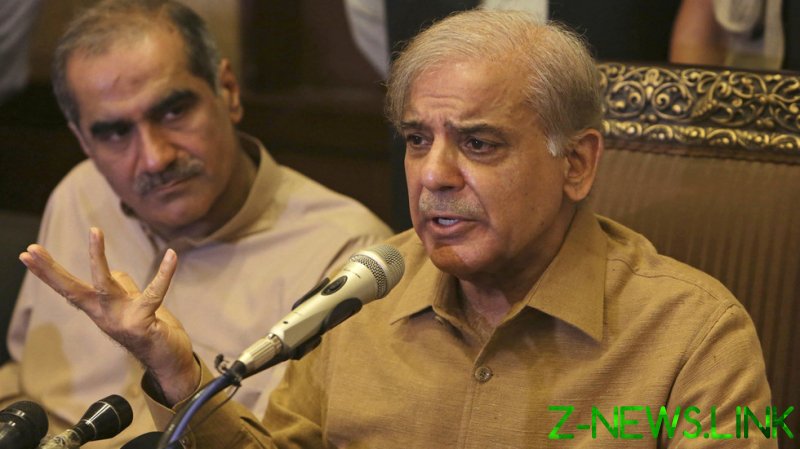 Pakistan’s Parliament has elected Shahbaz Sharif of the Pakistan Muslim League as the country’s new prime minister on Monday. The former opposition leader took office amid a parliamentary boycott by the party of outgoing Prime Minister Imran Khan, who has accused his political opponents of colluding with the US ahead of the no-confidence vote that led to his ousting on Sunday.

Sharif’s success comes after lawmakers in the National Assembly voted to remove Khan from office over the weekend with 174 votes; two more than the required simple majority in Pakistan’s 342-seat lower chamber of Parliament. Sharif previously served as chief minister of Punjab, whose some 110 million residents make it Pakistan’s most populous province, from 1997-1999 and again from 2008-2018.

He is the younger brother of former prime minister Nawaz Sharif, who was found guilty of concealing assets in 2017, when damning revelations emerged with the Panama Papers, and has led the Pakistan Muslim League since his brother’s conviction. In 2019, the National Accountability Bureau froze 23 properties belonging to Shehbaz and his son, Hamza Sharif, accusing them of money laundering. He was indicted for money laundering in 2020 and incarcerated pending trial before his release on bail in 2021. 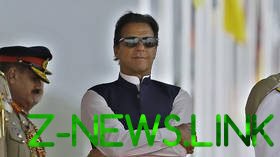 Back in March, Khan had accused political opponents of colluding with the US to undermine his authority, citing a briefing letter from Pakistan’s ambassador to the US which he says contained evidence that Washington believed his removal from power would bring about improvement in US-Pakistani relations.

“They say that ‘our anger will vanish if Imran Khan loses this no-confidence vote’,” the embattled PM alleged in a televised address at the time.

In response, US State Department spokesperson Ned Price had insisted there was “no truth” to the accusation and that Washington was “closely following developments in Pakistan” but that it “respect[ed] and support[ed] Pakistan’s constitutional process and the rule of law.”

Khan, a former cricket player who led the Pakistani team to victory at the World Cup in 1992, became the first prime minister in the country’s history to depart following Sunday’s vote of no confidence. He had resisted calls for his replacement, vowing to “never quit no matter what the result may be” and moving to dissolve parliament on April 3. His opponents appealed to the Supreme Court, which ordered the legislature reinstated and okayed the vote after four days of deliberations. 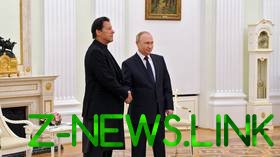 READ MORE: Imran Khan hits out at West for treating Pakistanis like ‘slaves’

As prime minister, Khan had maintained a fiercely independent foreign policy, arguing that Pakistan had suffered for previously supporting NATO’s military actions in Afghanistan. At a March rally, he declared, “We are friends with Russia, and we are also friends with America; we are friends with China and with Europe; we are not in any camp.” He met with Russian President Vladimir Putin on February 24, the day Moscow launched its military offensive in Ukraine, to discuss bilateral ties and regional issues. He later responded to a March 1 letter pressuring Pakistan to join a UN resolution condemning Russia over “aggression against Ukraine” by slamming its signatories, which included diplomats from EU, Canada, and Australia, accusing them of treating Pakistanis like “slaves.” Pakistan was one of 34 countries to abstain from the vote.

Moscow maintains that the attack was launched with the purpose of the “demilitarization” and “denazification” of Ukraine, and that it was the only possible option left to protect the people of eastern Ukraine following years of a grueling blockade that claimed thousands of lives. Kiev insists the offensive was unprovoked, saying it had no plans to retake the breakaway Donetsk and Lugansk republics by force.