New AOC book is another level of cringe worship 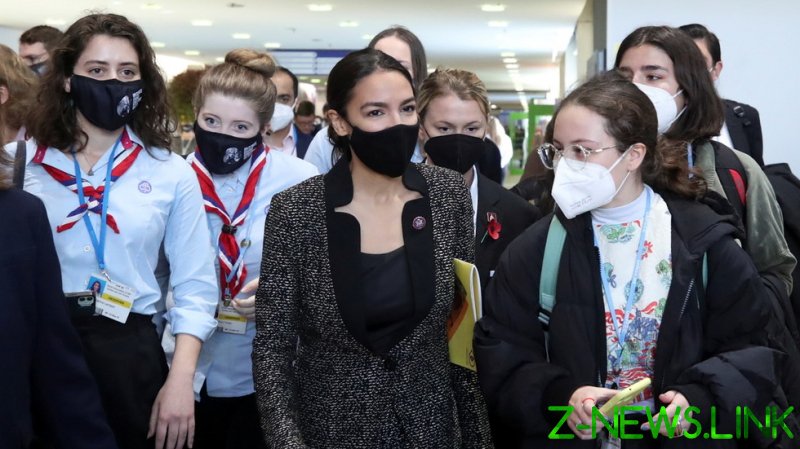 If Ocasio-Cortez’s millions of social media followers (12.8 on Twitter, 8.6 on Instagram) have not gotten enough of the young Democrat from her frequent posts, then they will soon be treated to ‘Take Up Space: The Unprecedented AOC,’ a book of essays on the 32-year-old that will release in February.

The work comes from editors for New York Magazine, each of whom has amazingly found their own section of this young woman’s life to obsess over, some admittedly more relevant than others.

One essay is on the “role that her beauty plays in her public perception” while another is an “analysis of her social media greatest hits.” Also included are deep-dives on the New York congresswoman’s boyfriend and her alleged “rare authenticity.”

Politicians being worshipped like celebrities has been happening for quite some time, but it’s grown increasingly bizarre in recent years. While an Al Franken or Arnold Schwarzenegger might blur the lines between celebrity and politician by jumping from one side of the fence to the other, we’ve now reached the point where you don’t need celebrity before you’re in office to get the red carpet treatment from the corporate media and a legion of mindless fans more interested in personas than policy.

AOC represents the worst point of celebrity politics yet. A former bartender, she did impressively become the youngest woman to serve in Congress in history at 29. Since then, however, the congresswoman has mainly confused people with her pie-in-the-sky fantasies like the Green New Deal, which is also given an essay in the book, unlike her numerous controversies.

The congresswoman sells herself as a socialist friend to the working class, but in her years in Congress, she’s done little more than shed crocodile tears over votes she can’t explain, staged photo shoots outside immigration detention centers, and issues she often reacts too far too quickly on with emotion, rather than fact. The young starlet – excuse me, congresswoman – also enjoys going to the expensive Met Gala, an event that costs most people thousands of dollars, while she has a designer in toe accused of running a basic sweatshop of unpaid interns. It’s okay though because she wore a dress that says ‘Tax the Rich.’ How’s that for “rare authenticity?”

AOC’s public gaffes are almost not worth mentioning at this point because they are such a common staple of who she is. Though they, of course, go unnoticed by people who worship at the altar of someone in Congress who acts like a star, rather than a politician. Overpaid government workers, who can’t seem to do much more than build their brands while in office, earning actual praise for things like social media posts and loopy deals that will never get passed in this lifetime is yet another sign of the decline of civilization.

The description for the upcoming AOC book even says it will be in the vein of similar works written about Nancy Pelosi and the late Ruth Bader Ginsburg, which seems like the authors are almost begging AOC to make a lifetime career out of cashing government checks, like far too many people in Congress (cheers to you and your upcoming 82nd birthday, Nancy).

Even if AOC could name more than creating a troublesome group in the Democratic Party that occasionally acts like an entertaining thorn in their side (the Squad is also getting an essay, don’t worry) for accomplishments in office, a book requiring 10 editors to dive into a 32-year-old’s love life, attractiveness, and “unprecedented” authenticity would still be cringe-inducing.

This worship of politicians is beyond unhealthy, and only feeds partisanship and our inability to actually have constructive conversations with people who disagree with us. It’s how Obama spent years selling himself as a candidate for peace, but then became George W. Bush 2.0 without much of the media blinking an eye (but they did ask him about his iPod).

It’s how Hillary Clinton can skate through her many controversies and spend her time on fluff interviews promoting half-baked novels. It’s also how there are still a vocal group of people who would refuse to admit Donald Trump has ever, ever made a mistake in his life, verbal or not.

It’s also how you get AOC – a direct result of this growing worship and focus on politicians’ personal lives and social media draw, as if they were the next big star, simply offering mindless entertainment, rather than just another disappointing politician who can’t measure up. If AOC one day runs for president (she is not old enough right now), it is likely we will live in a world where most know more about her fashion pics, love life, and Instagram habits than her actual political philosophies, or even have a grasp on basic common sense.