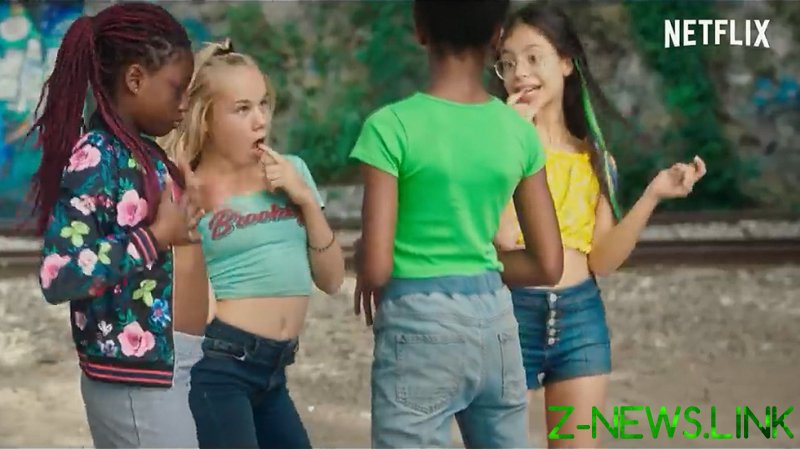 ‘Cuties’ premiered on Netflix this week amid much controversy and fanfare. As a film critic, I am willing to give the artistic benefit of the doubt to almost any movie, so as I sat down to watch ‘Cuties’ I was conscious of the controversy surrounding it, which had started three weeks ago after Netflix’s marketing material made the movie look like it was sexually exploiting 11-year-old girls. But I was also open-minded enough to think the film might not match the marketing.

‘Cuties’ starts off with an intriguing premise that is bursting with dramatic potential: it tells the story of Amy, an 11-year-old immigrant from Senegal, as she navigates the clash between her old-world, Islamic family, and the modernity and libertinism of her new French friends.

Unfortunately, ‘Cuties’ pretty quickly devolves from its powerful premise and becomes licentious and lurid rather than dramatically lucid. Director Maïmouna Doucouré makes the egregious error of trying to produce a social commentary on how modernity hypersexualizes young girls by actually hypersexualizing young girls.

I am a cinephile, not a pedophile, so I found Doucouré’s repeated and extended shots of 11-year-old girls’ scantily clad, gyrating pelvises, buttocks and groins to be gratuitous, shocking and, frankly, repulsive.

It is amazing that there are people out there, like highly respected film critic Richard Brody of the New Yorker, in a lather vehemently defending the film. Brody’s not so subtly titled review “’Cuties’, the Extraordinary Netflix Debut That Became the Target of a Right-Wing Campaign” praises the film, but ultimately indicts the critic.

Brody boasts, “I doubt that the scandal-mongers (who include some well-known figures of the far right) have actually seen ‘Cuties’, but some elements of the film that weren’t presented in the advertising would surely prove irritating to them: it’s the story of a girl’s outrage at, and defiance of, a patriarchal order.”

I’ve seen ‘Cuties’ and I’m not a right-winger, and yet I’m able to see the insidiousness of exploiting little girls sexually under the guise of being against the ‘patriarchy’. Why isn’t David Brody? Brody and his ilk are so eager for a culture war fight they are completely blind to the striking malevolence of ‘Cuties’.

For Brody, ‘Cuties’ is just another opportunity to signal his liberal virtue, as evidenced by his statement, “The subject of ‘Cuties’ isn’t twerking; it’s children, especially poor and nonwhite children, who are deprived of the resources – the education, the emotional support, the open family discussion – to put sexualized media and pop culture into perspective.”

It would seem Brody is over-estimating the power of education, as he is a Princeton grad and yet he is incapable of putting the deviant sexuality of ‘Cuties’ into proper perspective. Brody’s review comes to a close by stating, “’Cuties’ dramatizes what people of color and immigrants endure as a result of isolation and ghettoization, of not being represented culturally and politically… it’s enough to give a right-winger a conniption.”

To Brody and other ‘Cuties’ defenders – and there are plenty of them, as the film has a 90 percent critical score on Rotten Tomatoes – the film is just another gateway drug to the cultural narcotic of racism, sexism, xenophobia and all the rest, and another cudgel against “right-wingers.”

The beauty of it is that Brody is chastising “right-wingers” for politicizing ‘Cuties’ by politicizing his review of it, just like the film comments on the hypersexualization of kids by hypersexualizing kids. This is ‘Matrix’-level, multi-dimensional chess of the highest order.

On a purely artistic and cinematic level, ‘Cuties’ is a decidedly middling affair. Despite its one good shot, which is its final one, the film has no distinct visual flair and only seems capable of mimicking the style of those creepy American Apparel ads that were shot by – not surprisingly – famous photographer and alleged sexual predator Terry Richardson.

There is one scene where 11-year-old Amy is basically possessed by some evil, uncontrollable twerking demon, where in close-up she is sprinkled with water and gyrates in skimpy underwear, that is particularly reminiscent of Richardson’s style.

Brody and his companions in the elite establishment would despise that version of the movie, because it would show the depravity of the chaotic libertine world they cheer while showing a viable – and although not perfect, much more ordered – alternative.

In conclusion, being a film critic is sometimes a good job and sometimes a bad one. On the good days, you get paid to watch a Terrence Malick film… on the bad days you are forced to endure ‘Cuties’. I highly recommend you do yourself a favor and skip ‘Cuties’, and spare your mind and soul from being subjected to the toxic depravity of little girls being drowned in the most repugnant of cinematic sexual stews.