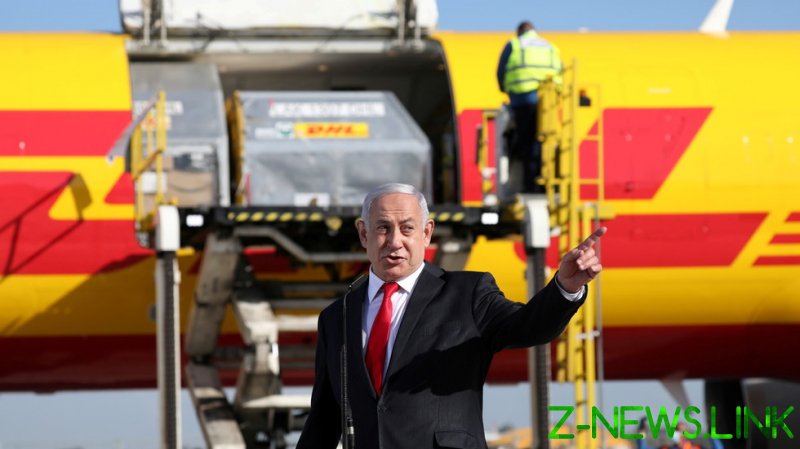 Netanyahu made the announcement during a press conference with Health Minister Yuli Edelstein on Wednesday, where he said he would be the first in the country to take the jab. He also noted that health authorities would work to roll out tens of thousands of doses per day and begin the “passport” plan to “encourage vaccinations.”

“After the discussion that we held here with the Health Ministry leadership, I can announce that the State of Israel is prepared to provide 60,000 vaccines a day to the citizens of Israel,” the PM said. Calling on “every Israeli” to take the shot, he added that he would “be an example and be the first person to be vaccinated” in the country.

The announcements came hours after the first round of doses for an immunization jointly developed by pharma firms Pfizer and BioNTech arrived in Israel earlier on Wednesday, soon to be followed by a “much larger” shipment, Netanyahu said.

While the UK became the first nation to green-light the Pfizer vaccine last week, soon followed by Canada, British health officials advised on Wednesday that those with a “significant history of allergic reactions” should steer clear of the vaccine “on a precautionary basis.” The US Food and Drug Administration, meanwhile, has been more hesitant to approve the new jab, however an FDA official recently said authorization could come within a week after an agency meeting set for Thursday.

Israel inked a deal worth some $237 million with the pharma giant last month to supply the country with 8 million doses of the vaccine, once it secured approval from regulators. Under the contract, Pfizer was to receive a payment of $35 million up front, with the remaining balance paid after the doses were shipped.

Vowing to bring “an end to the plague” with the inoculation, Netanyahu called on Israelis to keep up on “masks, distancing, hygiene and preventing gatherings,” adding that “On the eve of Chanukah, we have brought great light to the State of Israel.” With a population just shy of 9 million, Israel has recorded around 350,000 coronavirus infections and nearly 3,000 deaths since the outbreak kicked off late last year, according to data compiled by Johns Hopkins University.