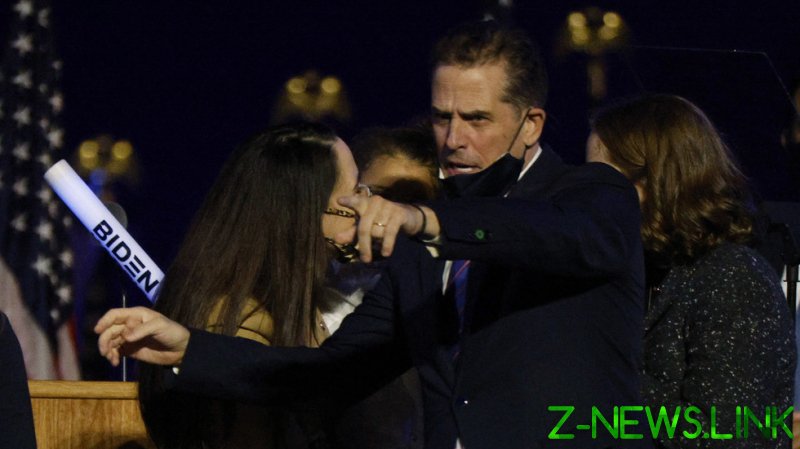 According to the broadcaster, the son of presumed President-elect Joe Biden may have failed to include in his tax returns the $400,000 he received from the Ukrainian energy company Burisma in 2014. This is a conclusion from an email, received by NBC, which was sent to Hunter Biden in 2017 by his business partner, Eric Schwerin, who was then the president of Rosemont Seneca Partners.

“In 2014 you joined the Burisma board and we still need to amend your 2014 returns to reflect the unreported Burisma income,” the email dated January 16, 2017 said as cited by NBC News.

Hunter Biden joined Burisma in 2014, shortly after the ousting of Ukraine’s president at the time Viktor Yanukovich, with the Obama administration showing its support to the protesters. Then-Vice President Joe Biden is considered to be the mastermind behind policy on Ukraine at the time.

Before getting the well-paid gig, Hunter Biden had no background in energy or Eastern European affairs – something that didn’t stop Burisma from hiring him to take a board position.

The Trump administration claimed that Joe Biden had later abused his government office to lean on Ukrainian President Petro Poroshenko and have him fire a prosecutor, who was investigating Burisma. Biden shared publicly how he pressured the Ukrainian leader, but insisted it was done to get rid of a corrupt Ukrainian official. The incumbent US president was impeached this year at the Democrat-controlled House for asking Poroshenko’s successor to investigate the allegations of impropriety.

The NBC news story comes with a caveat: the email comes from a trove of documents recovered from a laptop that Hunter Biden allegedly left in a Delaware repair shop and which became the centerpiece of a censorship scandal shortly before the November 3 presidential election. The laptop and its contents were reported by the New York Post, but many other US media outlets dismissed it as a likely piece of “Russian disinformation” and refused to cover it.

Facebook and Twitter throttled dissemination of the Post’s reporting on their platform. Users were initially prohibited from sharing links to the story altogether and the newspaper’s account was suspended for days.

After the election, it was reported that federal prosecutors in Delaware were looking into Hunter Biden’s financial affairs and dealings with China since at least 2018. He confirmed that he was under investigation and expressed confidence that the probe would establish that he handled his affairs legally and appropriately.

Social media reaction to the fresh email revelation shows a strong desire to again dismiss alleged corruption in the Biden family. Many latched on to the source of the email to claim that it must be a fabrication.

The Biden campaign dismissed the laptop story as a partisan attack on the ex-VP’s bid for presidency, but never challenged the authenticity of the underlying materials.

Those willing to accept possible wrongdoing by Hunter Biden chose another line of defense – saying that his alleged tax evasion has nothing to do with his father.

And there was of course a great deal of ‘whataboutism’ involving Trump’s undisclosed tax returns and the business affairs of his family.

Days before the election, NBC News published a long explainer of its reaction to the Hunter Biden laptop story. It cited several reasons for not covering it, including not having access to the source material, claims by former intelligence officials that it has “hallmarks” of Russian disinformation and a lack of proof of corruption of then-candidate Biden shown in what was published.

Another major factor, according to the article, was that the laptop was not expected to reveal much new information about Hunter Biden, his apparent cashing in on his family name and allegations that he peddled access and influence of his father.