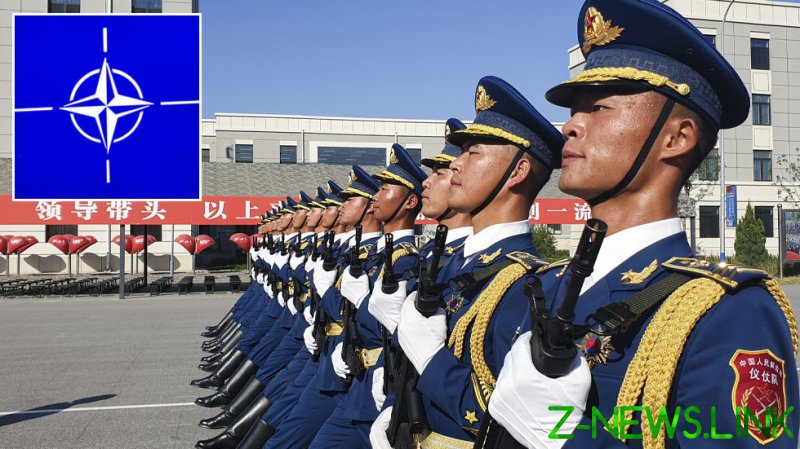 Putting aside the diplomatic niceties, his pitch is simple: NATO should turn its attention to Beijing. To put it more bluntly than Stoltenberg did, the US’ European partners should follow Washington into a new, openly-declared Cold War in East Asia.

The pitch belies the fact President Joe Biden is offering NATO members a deal they are not supposed to refuse. Either you help us in our new Cold War against China on which we have decided alone, or we will no longer help you feel safe from Russia. As Stoltenberg puts it, for America, NATO is “not something they do to be nice to Europe.” Instead, he reminds us, for Washington, allies must fit their national interests.

In other words, now that the endless ‘wars on terror’ are winding down, the US has identified its new geopolitical enemy number one, Beijing. The Pentagon and the attached military-industrial complex – as president Eisenhower once called it – must be kept in business after all.

And America expects its NATO allies to go along. Otherwise, the general secretary’s implication is almost rudely clear, NATO might lose its usefulness for America. And since, it isn’t investing in the alliance to ‘be nice’ but out of its own self-interest, Washington might then turn its back on it, either perhaps by demonstratively slamming the door, as former President Trump threatened to do, or quietly by simply shifting its attention, money, and military might away.

Yet there is a problem. NATO was built for a specific purpose: as its first British general secretary famously put it, to “keep the Soviet Union out, the Americans in, and the Germans down.” Whatever you think about today’s Russians and Germans, one thing is certain. A pact named the North Atlantic Treaty Organization was never meant to take care of the Pacific or deal with China.

The purpose of Stoltenberg’s far-fetched, if increasingly popular, story is to convince us that that does not matter now. For him, NATO is a sort of limitless transformer: As with the ‘war on terror’, we are once again asked to forget what NATO was actually designed to do and pretend that it can do anything else as well. And how do we know what that anything else is on any given day? That’s, actually, really simple: we check with Washington.

Yet the reality of EU-Europe’s situation is ill-served by this arbitrary approach. What Europe needs is to stay out of America’s new Cold War against China. There are three main reasons for this.

The first and most obvious one has to do with Stoltenberg’s claim that China is “getting closer” to Europe, in, he clearly means, a threatening manner. But that is an almost Orwellian abuse of language. In reality, China has become more closely integrated into the global economy – witness the effect on supply chains when Chinese harbors have Covid problems – and that is exactly what we have all wanted, isn’t it? Except, of course, that China is doing so while preserving its own political system, instead of fulfilling Western fantasies about adopting our ways.

Beijing is expanding its trade, investments, and therefore, also its interests and influence. But that is how globalized capitalism is supposed to work. Stoltenberg may feel that China is playing hardball, when it comes to its currency, intellectual property, or attaching conditions to credit and investment, for instance. He may dislike the fact that Beijing looks at its regional neighborhood as a security challenge that requires modern military power and constant self-assertion. The notion that Beijing – just like Washington, Moscow, or Brussels – defines even more wide-ranging interests for itself, in essence ranging across the globe, may leave him shocked.

Yet, in all these respects, China is not different from other powerful states, looking out for itself, deterring potential enemies, and seeking its advantage even in cooperation. Ironically perhaps, that is the world that the West has built over, roughly the last half-millennium. Insofar as we actually live in a ‘rule-based’ international order, those are its real rules, and we’ve only got ourselves to blame. The only thing that is historically new is that the West cannot dominate anymore and is challenged at its own game. This fact requires adjustment by negotiation and, if we are really smart, by finally rethinking the rules, together. But it has nothing to do with any special threat that China poses to Europe.

The second reason why Stoltenberg is wrong is that the actual relationship between Europe and China is irreconcilable with the Cold War-posture, which following the US would produce. China, not America, is now the EU’s single biggest trading partner. It is true that the EU and China do by no means always see eye to eye, in fact, recently the relationship has been rocky, with the EU officially considering Beijing a ‘competitor’ and ‘rival’.

Yet, in the case of China and the EU, powerful common interests, from the economy to the fight against global warming, clearly outweigh such clashes. There may be temporary conflicts, but it is in the interest of both sides that those be resolved – or suspended – without compromising the potential and urgent need for cooperation: There’s nothing wrong with not always being friends between Brussels and Beijing. But it would be idiotic to become enemies or anything less than partners.

This brings us to Stoltenberg’s third mistake. He entirely misses the key difference between Europe and the US with regard to China. Europe is in a position to profit from China’s rise, because it does not have to lose what America has to lose.

Because China’s ascent really does threaten something very big. Yet that something is not Europe, the international order, or even the USA as such. What China really calls into question is Washington’s top dog role in the world, which, again, is not the same as America itself.

There was a time, quite a while ago by now, when US hegemony was in (Western) Europe’s interest. But it no longer is. In fact, after Trump’s tantrums and Biden’s Great Rout of Kabul, even the most doctrinaire European Atlanticist must face the facts: America is not a reliable hegemon, neither with respect to its domestic order (it might well turn from being an oligarchy with democratic rest features into an oligarchy with growing authoritarian features) nor regarding its commitments and behavior abroad.

If that is so and once Stoltenberg wants to have a conversation about interests, then what is Europe’s interest in following the USA? Especially if following it now means to enter into a Cold War with China? Stoltenberg’s whole real point, barely hidden, is that NATO is so important to Europe that it must do simply anything to preserve it, even shoot itself in both feet at once by joining Washington in a fight for America’s hegemony that is not at all in Europe’s interest.

But while it may be beyond his imagination, Europe could guard and defend itself without the USA. Not now, because the Europeans are too miserly on their defense budgets and their elites too invested in loyalty to the US. But in principle, the EU has everything that it needs to take care of its own security, and what it does not have now, it could build up or acquire.

There is, put differently, no need for Europe to go to war with China – cold or hot – to protect American hegemony. Because, first, it is not Europe’s but America’s to lose, and second, it is a risky, unpredictable hegemony that is no longer in Europe’s interest. Instead, Europe needs to finally learn to stand on its own feet. Then, it will at least be able to avoid fights it has not picked, where there is nothing to gain and everything to lose.