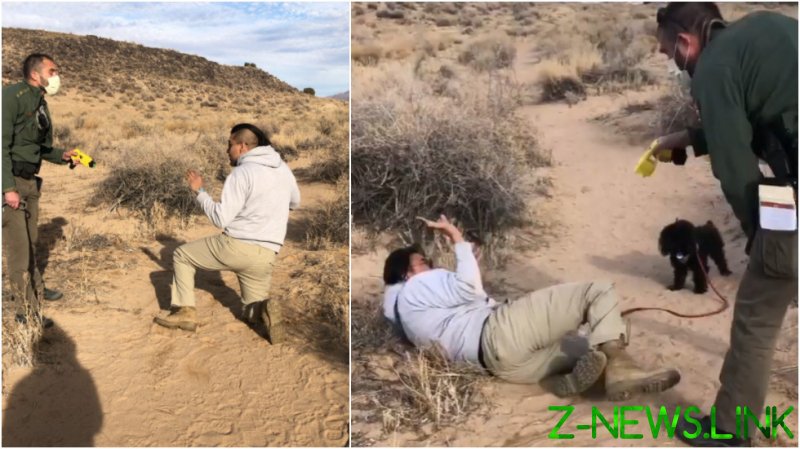 Darrell House, a Marine veteran with Navajo and Oneida heritage, was accosted by rangers on Sunday after taking a stroll at Albuquerque’s Petroglyph National Monument, home to thousands of ancient Pueblo rock carvings. The encounter was captured in footage posted to House’s Instagram page, filmed first by himself and later his sister.

“Today… I was tased for being off trail at the Petroglyphs. I come here to pray and speak to my Pueblo Ancestor relatives. Even though I’m Navajo and Oneida, I honor this land,” House wrote in a caption on one of the Instagram videos.

I didn’t feel I needed to identify myself for doing absolutely nothing wrong. I’m traumatized. My left leg is numb and still bleeding.

In another clip – apparently filmed near the beginning of the altercation – a ranger identified by House as “Mr. Graden” is heard asking for identification, but when House declines, informs him that he has refused a “lawful order” and would be detained until he provided ID. House responds: “You’re not going to touch me, sir.”

Some time later, the longer video begins with House on the ground in distress as the ranger attempts to restrain him, tasering him multiple times in the process. House is heard shouting for help, saying “I’m not doing anything!” and “I’m a peaceful person” while the ranger demands he put his hands behind his back.

House told local media that he strayed from the trail for social distancing purposes after a larger group approached him and his sister, but that he also routinely prays at the site, which sometimes means leaving the designated path.

“I go there to pray. I bring my sage. I do my prayers. I harvest dirt from the area for ceremonies,” he said, adding, “This park ranger started following me, and he came out of nowhere and he got upset about that. I guess he was upset about me going off trail before, you know, doing my prayers for the rocks.”

I didn’t cause any harm to anybody. I wasn’t disorderly. I wasn’t on any substances. This has been going for years. I’m practicing my religious rights on my ancestral land.

Though House was slapped with three citations over the mishap – for being “off trail” at the monument, concealing his identity from rangers and “interfering with agency functions” – the National Park Service said the incident is now “under review” and had been referred to an internal affairs unit for a “thorough investigation.”

“While we work to gather the facts of this specific situation, we cannot speculate on the events leading up to what was captured on video,” agency spokeswoman Vanessa Lacayo told the Associated Press.

Albuquerque’s Office of Equity and Inclusion also issued a statement after the incident, calling the footage “disturbing” while noting that it had directly contacted the Park Service for clarification.

Earlier this year, a park ranger at the Carlsbad Caverns National Park, just north of the New Mexico state border, shot and killed a visiting Colorado native after he was stopped for speeding down a dirt road. The ranger, Robert Mitchell, first tasered the man after he failed to comply with an order, later fatally shooting him during a brief struggle on the ground. Mitchell was cleared of criminal wrongdoing, but still faces a federal lawsuit brought by the victim’s family.