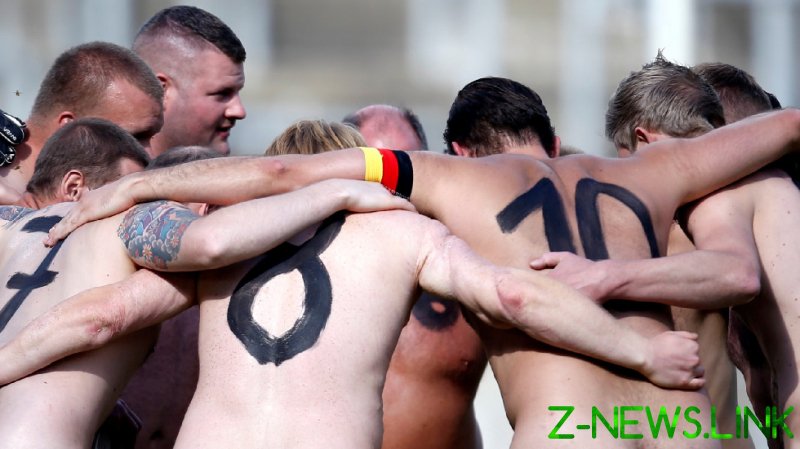 Artist and filmmaker Gerrit Starczewski has been inundated with attention since his side, the Pottoriginal Allstars, faced the Nacktionalmannschaft – whose punning name positions them as Germany’s would-be naked national team – in a naked show of protest in Duisburg, western Germany on Saturday.

The Allstars were not shy to show off, either: wearing nothing but boots and socks on a hard surface pitch, the squad of exhibitionists posed before the game with the message ‘Boycott Qatar 22’ on their bare backs – a reference to the contentious World Cup taking place at the end of next year.

Starczewski, whose previous high-profile stunts have included a naked football match against the Netherlands in 2020, has received a wide range of requests for interviews, from English TV and newspapers to national media and prominent art magazines in Germany.

“We wanted to make a sign against the [German FA] DFB, the World Cup 2022 in Qatar and bodyshaming,” says Starczewski, who is raising funds for an expensive lawsuit, reportedly against an amateur footballer with a surname that translates as ‘f*ck’ who has raised a court case against him because their ID card was shown in a 2017 documentary.

“I am still totally euphoric and really super-happy and grateful for this energy that there was on Saturday on the glorious ash square of Post Siegfried Hamborn in Duisburg.

“Even two days afterwards, my adrenaline is still noticeable, as if I have experienced pure happiness.

“Our project is really fighting for every inch right now; the many court processes – and the horrifying costs that will result – are taking everything.

“The love and encouragement that still shows over here through the game is balm for the Pottoriginals soul that has been beaten multiple times. With [that] on our side, the project is unbreakable.”

Around 300 people are said to have watched the saucy spectacle, which is far from the first to have witnessed a pre-match gesture against the World Cup.

Norway and Germany’s footballers have also worn t-shirts making clear their concern with the reported deaths of around 6,500 workers on construction sites ahead of the tournament, with Denmark’s FA and its national players campaigning for change, admitting they did not want the World Cup to be held in Qatar and forming an alliance with Amnesty International.

Pottoriginal have made their feelings clear again, decorating their messages following the match with hashtags including ‘f*ck FIFA’.

“This day has left memories – for eternity,” says Starczewski. “From now on, we will always try to play in front of an audience.

“That was just great. Simply awesome. I can’t answer all of the messages [I am receiving] at the moment.

“Suffice to say, we will play again. Just a big thank you again to all who came. To all players, especially the German nacktional team. This effort on ashes – just wow.

“We will take some more time to process the experience and then we’ll start planning for another game. We have October the 9th in mind.”