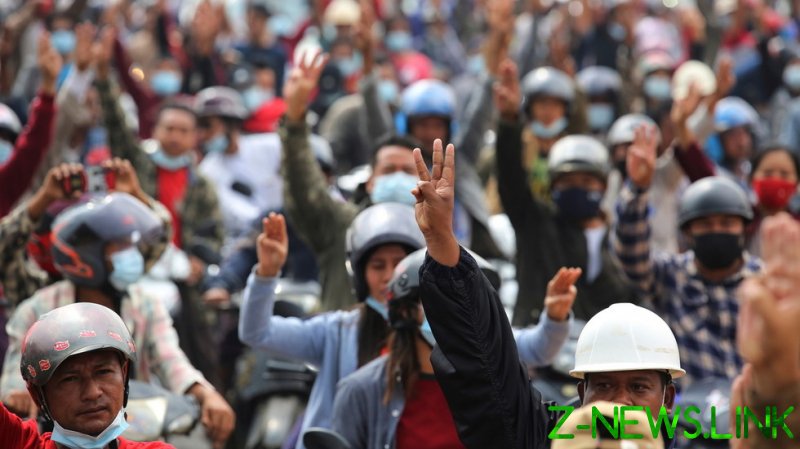 The incident, which reportedly happened in the border town of Myawaddy on Sunday, shows the fragility of the situation. The mass protests – the largest Myanmar has seen since the 2007 crisis – have so far been largely peaceful, but the country remains in a volatile state since the start of the coup on Monday.

The protesters are demanding the release of State Counsellor Aung San Suu Kyi, President Win Myint, and others arrested by the military, and for the civilian government to be back in power. The generals have declared a year-long state of emergency and ousted Myanmar’s leadership, accusing Suu Kyi’s National League for Democracy Party (NLD) of rigging last November’s general election.

Over the weekend, rallies have been staged in Yangon, Myanmar’s largest city, and other places in support of Suu Kyi. The Nobel Peace Prize laureate is loved by many people in her country, despite the fact her reputation has been tarnished in recent years, with many accusing her of turning a blind eye to the genocide of Rohingya Muslims during her time in power.

In addition to going on marches, the protesters were trying to make themselves heard by banging on pots and pans during evening hours. The traditional ritual is usually used to ward off evil, but it has been repurposed for a political cause.

The military have so far apparently not used force to suppress the demonstrations against their rule. But they have reportedly cracked down on social media, curbing the opposition’s ability to organize.

Facebook confirmed on Thursday that telecom providers in Myanmar were told to temporarily block it, while monitoring group NetBlocks Internet Observatory reported “a near-total internet shutdown” in the country on Saturday.

Access in the country had reportedly partially improved as of Sunday.

It remains unclear how many people were arrested along with Suu Kyi. A local activist group claims over 130 people may have been put into custody. Sean Turnell, an Australian economic adviser to the ousted counselor, is the only foreign citizen reported to be among those detained. He messaged Reuters about his imminent arrest on Saturday, before contact with him was lost.

The coup was condemned by a number of countries and the United Nations, while the US threatened the country’s military leadership with sanctions.