Home / WORLD / My years in the police tell me some Islamic terrorists are likely reaching our shores in those rubber dinghies, I fear the worst

My years in the police tell me some Islamic terrorists are likely reaching our shores in those rubber dinghies, I fear the worst 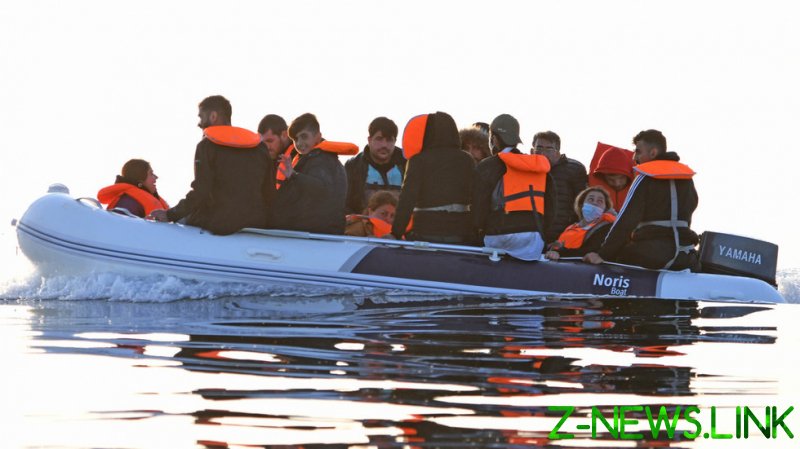 Five years ago, I was the elected police and crime commissioner for Surrey, a county in the southeast of England. I almost immediately discovered that our county’s police were being overwhelmed on an almost daily basis by illegal immigrants coming into the UK.

It turned out that the reason was simple. The first stopping place for lorry drivers bringing goods into the UK was at the Cobham motorway services on the M25 in Surrey. To put it simply, after a long drive from Dover ferry port, the drivers would stop at these services to use the toilet and maybe buy a coffee and a bite to eat.

While they did so, the illegal immigrants who had climbed into the backs of their lorries when they stopped in France and who had traversed the English Channel, would take their chance to jump out. Cobham was their first opportunity to do so and sometimes up to 30 from just one lorry would get out, requiring the local police to send many officers to try and catch them.

Normally they would only manage to round up a few, while the others disappeared. In Surrey alone, dozens would slip through the net every week. I’d sometimes be driving and see groups of them walking along the side of the A3, heading for London, and I’d call it in. I know from former colleagues that it was the same story at other motorway service stations all over the country, anywhere that the lorries which had been on the continent stopped.

The UK Border Force was then, as now, overwhelmed. In fact, so understaffed were they that they had to employ retired police officers at our airports on zero-hours contracts to check passports. At least Covid and the reduction in flights has stopped the need for that particular Band-Aid now. Nonetheless, these part-timers are being kept on retainers for when flights resume, so desperate are the border staff shortages.

Despite my protests to the government and articles in the national press at the time, little was done to stop this flow from freight lorries. I decided to up the ante. I was invited by a BBC camera team to go into the Calais ‘Jungle,’ the huge shanty town of tents and plastic tarpaulins that had grown up on the edges of an industrial estate close to this key ferry port in France.

What I saw there was very disturbing and frightening. There were literally thousands of young men and youths from all over Africa and the Middle East living as best they could in what had become a makeshift town of homes, cafes, restaurants and even hairdressers, all fashioned from packing cases.

The camp was split into segments, where the citizens of the Third World lived alongside each other, like some dystopian United Nations of Refugees: Somalis, Sudanese, Nigerians, Libyans, Afghans, Iraqis, Syrians and Kurds. It was utterly lawless – even the heavily-armed French CRS riot police would not enter except infrequently and in large numbers; one Sudanese man was stabbed to death the day I was there. Eventually, we were rumbled in the Somali quarter and had to literally run for our safety.

There were very few women and even fewer children at the camp. The inhabitants were for the most part male economic migrants in their teens and their 20s, seeking refuge from their impoverished, often war-torn, homelands. I did not blame them for seeking to find a better life for themselves, and in time, to help the families they had left behind.

What worried me, though, was that there was a good chance that among them were returning jihadist or ISIS fighters using this as a route to enter the UK without being recognized, and with revenge on their minds. After all, if so many thousands could do it, why shouldn’t they do so by hiding in plain sight?

Since then, the French have broken up and moved these “transit” camps, but the streams of  humans seeking to get to Britain have not gone away. They are still there in France in their thousands, awaiting their chance to find a way – any way and by any means – into the UK.

Instead of sneaking onto lorries, the method du jour of getting across the English Channel is to make the perilous journey in a rubber boat, at risk of freezing to death in one of the busiest and most dangerous shipping lanes in the world. Just this week, a 28-year-old Sudanese man drowned after the 3-foot dinghy he and a friend were in was punctured by the shovels they were using as oars.

Hundreds have been arriving in this way over the past weeks and months; so many that the county council in Kent, where most set foot ashore, has been overwhelmed and the government has been forced to ship out the arrivals to stay in three- and four-star hotels across the UK.

The UK government is talking a tough game, but what can they really do? Will the French really play their part and stop them coming? Why should they? If they make efforts to stop them leaving France for the UK, it is the French taxpayer, authorities and economy that must pick up this burden. Why would they want to do that if they can just turn a blind eye and let them cross to the UK?

Remember that we have left the EU; we are not part of their club and are effectively economic rivals. The French owe us no loyalty now, if they ever did.

It’s obvious if you are a hard-pressed local politician, gendarme or public official in a French coastal town that you will just be glad to see the back of them. To be blunt, if among them there are some returning British jihadists, why on Earth would the French want to hang on to them?

As we know only too well, the French have their own terrorism problem, which is only likely to increase. There are an estimated 1,000 ISIS fighters who were imprisoned on their return to Europe prior to 2015 expected to be released this year, according to this study. One analysis from July this year found that 60 percent of those who left France to fight for jihad in Afghanistan, Bosnia, or Iraq between 1986 and 2011 went on to commit a fresh terrorist offense upon their return. While that recidivism rate may be abnormally high – other studies have put it at six percent or lower – even 60 new terrorist attacks across Europe would pose a significant problem, especially when put alongside first-time attacks.

The solution to this problem lies outside of a tactical agreement with the French to do more to stop migrants coming across the channel. Even if we pay the French to tackle the problem, it is going to be almost impossible to ensure that a couple of local gendarmes patrolling an isolated beach after dark can stop all the rubber boats from leaving. They will get no thanks from the bosses or politicians for doing so.

We could try and disrupt some of the organized criminal gangs making money out of this lucrative business, but ‘how’ is a big question – who will do it and who will pay?

But regardless of that, the illegal economic immigrants and genuine refugees will still try to come. It is partly our own fault, a self-inflicted wound: we played a big part in destroying the economies, livelihoods, and systems of government in Libya, Iraq, Syria and Afghanistan. Our military interventions in those countries have been devastating. Far from creating the solutions our politicians promised, they have left already fragile nations in a worse state, fracturing their economies and societies to the point where young men are left with little option but to flee elsewhere.

Our government can continue to talk tough while many hundreds, if not thousands, of former British ISIS fighters plot their escapes and return home from Turkish, Syrian and Kurdish refugee camps.

What they will do when they get back into the UK is unknown, but I doubt it will be nice. Their experiences are hardly likely to have reformed them or endeared them to our way of life. After all they have been through – mass air attacks, savage fighting, the destruction of their caliphate – a nice little four-hour boat ride across the Channel pretending to be a refugee will be child’s play.