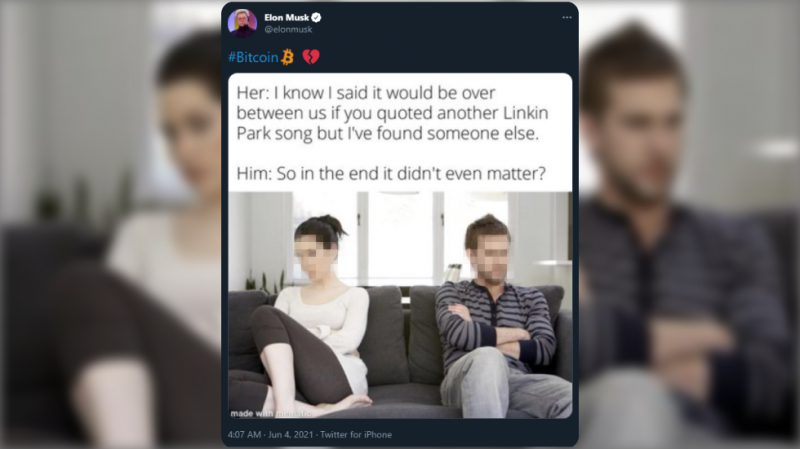 The billionaire tweeted a meme of his own on Friday, about a couple breaking up, adding the hashtag #Bitcoin and a broken heart emoji. He later followed with another featuring a breakup comic strip. He provided no context for the tweets.

However, it seems a mere meme from Musk has the power to shift the market. After his comment on Friday, Bitcoin – the world’s top cryptocurrency – slipped over 3%.

The entrepreneur was previously a major promoter of cryptocurrencies, with Tesla accepting payment for cars in bitcoin until Musk became critical of the currency, citing environmental concerns. In May, he said Tesla would stop accepting bitcoin as a payment method because mining it used too much energy.

Musk’s comments caused a major crash of the entire crypto market. After reaching a record high of more than $64,000 in April, bitcoin plummeted to around $30,000 in May.

His latest comments on the cryptocurrency have provoked a storm of memes on Twitter in response – most of them critical. Some refer to Bitcoin 2021, a two-day conference in Miami this weekend, which has attracted thousands of bitcoin investors.

Others describe the effect Musk’s tweets have on bitcoin and on them.

One user accused the billionaire of “messing with people’s lives” because some of those he’d influenced had invested their life savings in bitcoin, adding that Musk’s comments were “choking a lot of people.” Some were angry at Musk for apparently making fun of those who’d lost money and blithely ignoring the consequences his words have on others, and lamented the fact the billionaire was arguably among the most influential individuals in the US.

Bitcoin’s advocates have argued it can act as a hedge against inflation, but skeptics have warned bitcoin is a speculative bubble waiting to burst.