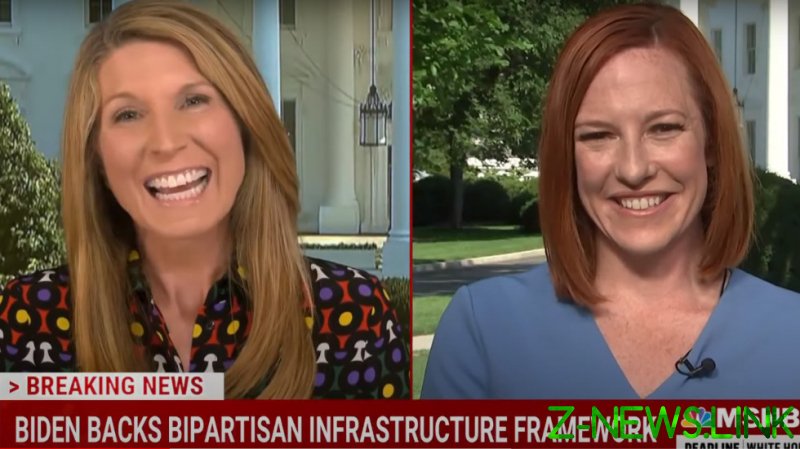 Appearing on MSNBC’s ‘Deadline: White House’ on Thursday, Psaki was treated to a friendly sit-down with Wallace, who served as communications director in the George W. Bush administration. After a brief exchange about what the outlet described as “voter suppression laws” backed by Republicans, Wallace opened the floor to the press secretary to talk about how she liked her job so far, claiming that most White House reporters approve of her work.

“Jen, I’ve walked in similar shoes to the ones you walk in now… How do you feel it’s going?” the host asked.

As Psaki replied, saying she believes her role is to “rebuild trust with the public,” Wallace interjected to offer a tip to the press secretary. Having had many “heated debates” with reporters while working as Bush’s comms director, she told Psaki “Stand your ground is my only advice.”

“You stand your ground as often as you can, but it’s also a place where I have to answer tough questions and that’s what I signed up for,” Psaki said, though added she would not “allow the briefing room to be a forum for propaganda or false information, so there’s that.”

The breezy interview was soon slammed as an example of reporters “groveling” before government officials. Journalist Glenn Greenwald likened the MSNBC segment to a previous “loving” sit-down with CNN’s Brian Stelter.

“Congrats Psaki – there’s no praise higher than that coming from Bush’s comms director who lied her way through the Iraq War!” one critic observed.

Other critics ridiculed the Psaki interview as the “opposite of journalism,” which would typically see reporters pose difficult or important questions during a rare one-on-one exchange with a top state official.