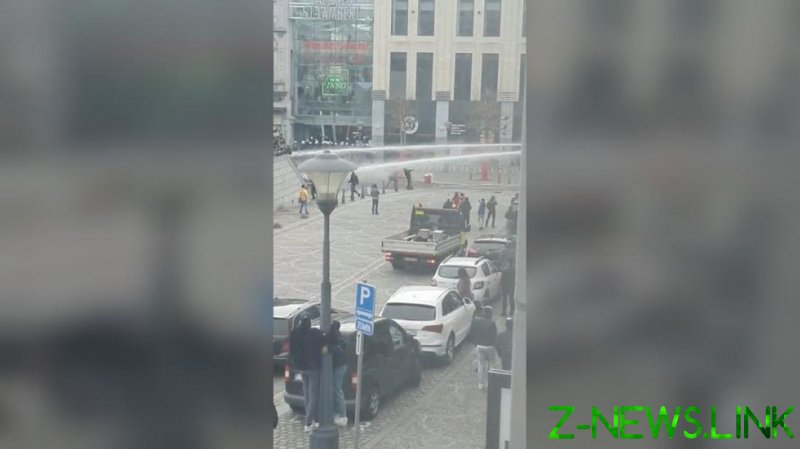 The demonstrators took to the streets of the eastern Belgian city on Saturday to protest the arrest of a black woman by police earlier this week. The march remained peaceful until a group of rowdy youth joined the procession, and then spread through the city centre, wreaking havoc.

Vandals smashed windows in stores, and “ransacked a whole McDonald’s” in their assault on city businesses, police said.

Police used water cannons in a bid to disperse the crowd as rioters threw rocks at officers and attacked police vehicles.

Several officers have been injured as result of responding to the unrest, police said.

The video that triggered the Saturday protest and sparked accusations of racism against Liege police, saw officers pinning a woman of Congolese descent down to the ground. The woman claimed that an officer beat her with a baton and almost choked her after she refused to get to the ground and set out to leave following an ID check. The woman, identified by local media as Tania, said that she approached the officers herself after she saw them surrounding a woman, who apparently felt unwell. Being a caregiver, she said she wanted to help the woman until the ambulance arrived. However, her interaction with police quickly went off the rails.

Police defended the officers’ conduct, claiming that the woman, who is now being accused of “rebellion”, went berserk and bit one of the officers, which led to the showdown. Police spokesperson Jadranka Lozina described the use of force as “a clean, justified intervention,” insisting that “police have nothing to be ashamed of.”

Still, the incident has drawn comparisons with the death of American man George Floyed in police custody that triggered a wave of protests in the US last year. The protests were often marred by violence, spiraling into looting and vandalism.