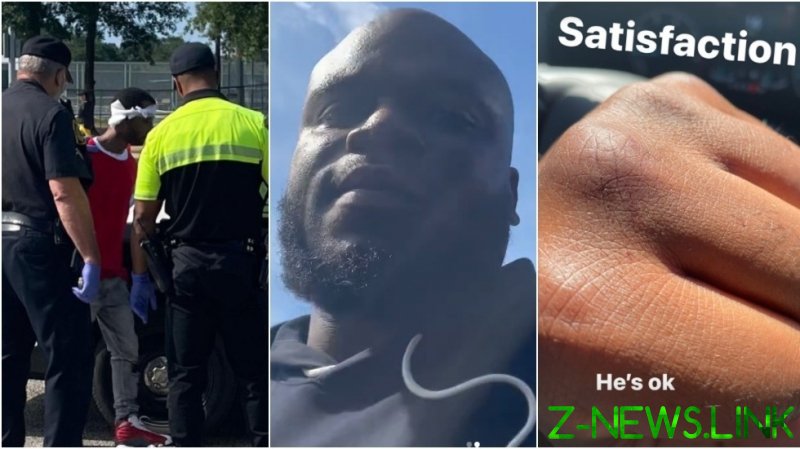 Lewis, the second-ranked fighter in the UFC’s heavyweight fold, is widely expected to fight Francis Ngannou later this year in what will be his second bid to claim a world title.

But according to footage posted to his Instagram account Tuesday, he came close to getting some early sparring in when he tackled a man who was allegedly attempting to break into his car.

The 36-year-old behemoth revealed online that Houston police had taken a man into custody – with the would-be thief appearing to have his head in a bandage. The Instagram post implies that Lewis confronted and tackled the intruder.

“Motherf*cker tried to break into my sh*t,” Lewis said in a video accompanying his post, while adding in the text caption: “Mofo pick right/wrong car to break into. HE’S OK.”

Lewis also referenced the incident on his Instagram story, showing a close up what appears to be a bruise on his fist along with the text “satisfaction” and “he’s OK“.

ESPN reporter Ariel Helwani has since taken to social media to state that he has been speaking with Lewis who confirmed that he knocked the man out in the fracas.

The Houston Police Department has not yet commented on the arrest, per MMA Junkie.

Lewis has won four straight fights in the UFC’s heavyweight division, including a sensational knockout of fellow top contender Curtis Blaydes in February, to put him in line for what would be his second title shot in the division. He came up short in his first against then-champ Daniel Cormier in November 2018, losing to the former Olympian by second-round rear naked choke.

And if Lewis is looking for any good omens ahead of his next world title opportunity, cast your mind back almost exactly a decade when Jon Jones tackled a car thief on the very same day that he would ultimately claim the UFC light heavyweight title when he blitzed Mauricio ‘Shogun’ Rua in New Jersey in March 2011.

“Imagine trying to break into someones car and turns out its Derrick motherf*cking Lewis,” noted one MMA fan in response to the footage.

Another said that the incident brought back memories of another similar incident of MMA vigilante justice, “Reminds me of a story I heard about a couple guys breaking into Lloyd Irvin’s house while Brandon Vera and a couple other fighters were there. Talk about bad timing.”

A third summed it far more simply, however: “That would be the last car I tried to break into.”