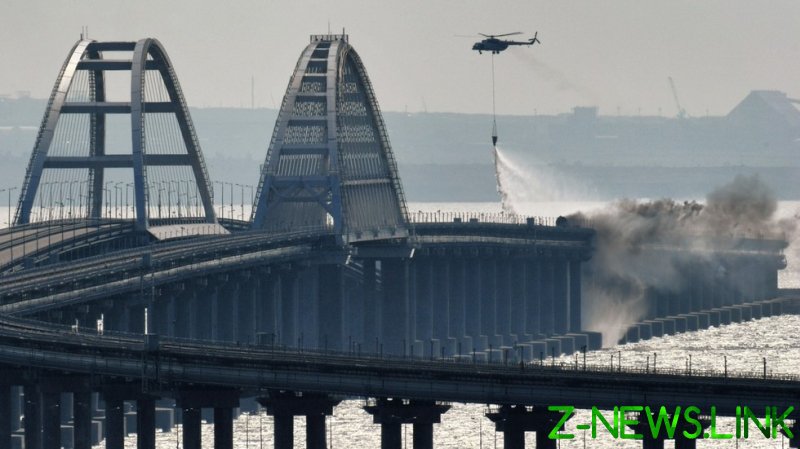 Ukraine’s reaction to the explosion that damaged the Crimean Bridge speaks to the “terrorist nature” of its leadership, Russia’s Foreign Ministry spokeswoman Maria Zakharova has said. The bridge was closed for traffic after a truck blew up early on Saturday.

“The reaction of the Kiev regime to the destruction of civilian infrastructure testifies to its terrorist nature,” Zakharova wrote on Telegram several hours after the blast.

Ukrainian officials have stopped short of claiming responsibility for the explosion, but an aide to President Vladimir Zelensky, Mikhail Podoliak, warned on Twitter earlier that what happened at the bridge, called the Kerch Bridge, was “just the beginning.”

Ukraine’s Defense Ministry also tweeted that “the guided missile cruiser Moskva and the Kerch Bridge – two notorious symbols of Russian power in Ukrainian Crimea – have gone down. What’s next in line, russkies [Russians]?”

Russia’s Black Sea flagship Moskva sank off the coast of Odessa in April. According to Moscow, a fire broke out on board, causing the detonation of ammunition. However, Kiev claimed to have struck the cruiser.

Various Ukrainian officials have promised to attack the Kerch Bridge, which connects the Russian peninsula of Crimea to the country’s Krasnodar Region, on several occasions since the conflict between Moscow and Kiev broke out in late February.

The blast on Europe’s longest bridge occurred at around 6am local time, leading to a partial collapse of the road on the part of the bridge used by vehicles. A blaze also broke out on the parallel rail section, where seven fuel tanks caught fire.

Russia’s National Anti-Terrorism Committee said that a truck blew up as it was traveling along the 19-km-long structure. CCTV videos from the scene also showed a vehicle exploding.

The fire has already been extinguished, and the damage caused by the blast is being assessed. The Crimean authorities said that ferry service would be provided while the bridge is being repaired.