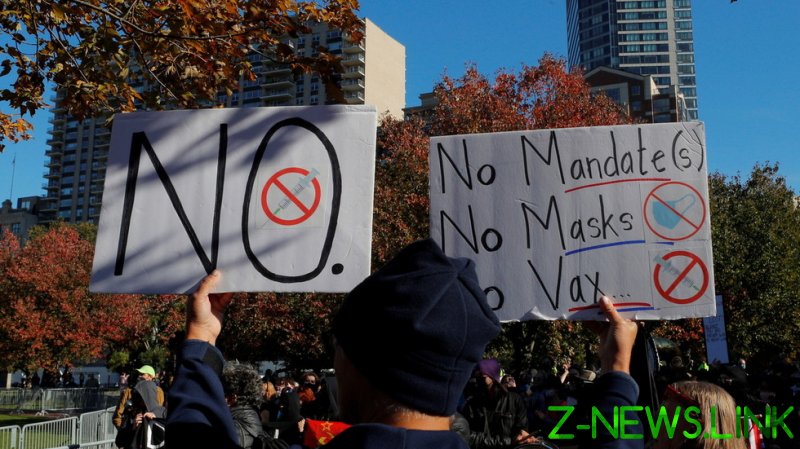 Plaintiffs in the lawsuit, filed this week, include attorney generals for the states of Alabama, Arizona, Georgia, Idaho, Indiana, Louisiana, South Carolina, Utah, and West Virginia.

The lawsuit blasts the Biden administration for “playing statutory shell games with the courts” and “straining to justify an unjustifiable and unprecedented attempt to federalize public health policy and diminish the sovereign States’ constitutional powers.”

It is only the latest legal hurdle for Biden’s vaccine mandate, which requires employers with 100 workers or more to require their workforce to be inoculated against Covid-19. Opting out of vaccination means employees need to be tested weekly. Employers who do not comply could face thousands in fines, though this has not stopped numerous companies from publicly saying they will not follow the mandate.

Healthcare workers, however, are in more of a predicament, as most do not have the option of even getting tested weekly, with vaccinations being required for any healthcare facility receiving Medicare or Medicaid funding.

The lawsuit argues that healthcare employees should be able to “make their own decisions about their health” rather than the federal government.

A Fifth Circuit Court of Appeals judge has already granted a stay on the rule based on a lawsuit from multiple states, including Utah and Texas, setting up the White House to defend the legality of the mandate in upcoming special hearings on the matter. In a Friday statement, the court reaffirmed its position on the mandate, saying it presents “serious Constitutional concerns.”

“Federal judges have already blocked one mandate from going into effect, and the mandate for healthcare workers should be no different,” Montana Attorney General Austin Knudsen said of the suit, arguing that the mandate will lead to staffing shortages and could eventually threaten the “access to medical care” that Americans need.

The dozen states suing Biden join 10 other states that filed a suit last week over mandates for healthcare workers.