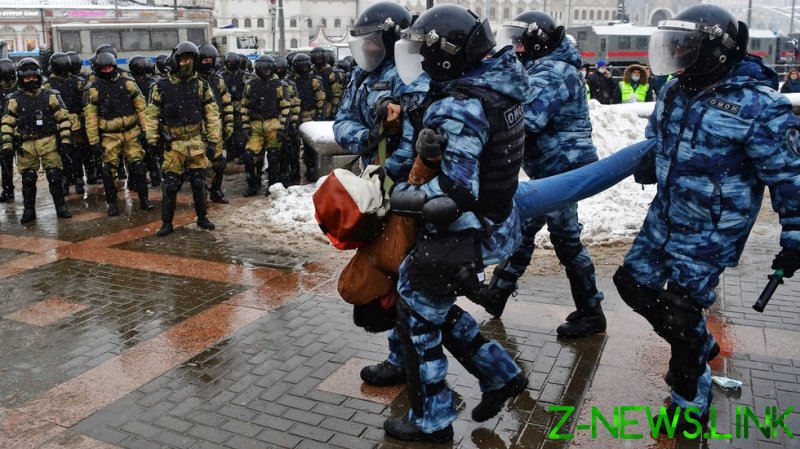 It marks the second weekend in a row where crowds have turned out to show support for the jailed anti-corruption activist, who is currently awaiting trial for breaching the terms of a suspended sentence for fraud. However, those on the ground in many cities reported smaller numbers of demonstrators than last Saturday.

In St. Petersburg, which has seen some of the most pronounced violence over the past fortnight, a video emerged of a tense standoff between officers and protesters. After a small group of police were chased down a street off the city’s Sennaya Square, one officer, who had stumbled after being kicked by a pro-Navalny marcher, drew his service pistol.

Other clips from Russia’s second largest city showed lines of OMON troops, the country’s specialist riot police, beating their shields and pushing back waves of demonstrators. Later on Sunday, the local Investigative Committee’s press service reported that a man who had punched a police officer several times in the head had been arrested.

The Union of Journalists of Russia issued a warning after 60 media workers were detained. At least eight of those held by police were in St. Petersburg and footage showed a reporter in a fluorescent yellow ‘press’ vest being carried off to a waiting vehicle. Journalists had been asked to wear the garments to identify themselves during the events.

There had been reports that stun grenades and tear gas were used to break up the crowd in the historic city center, and one video showed protesters screaming after a loud explosion overhead. However, the Ministry of Internal Affairs denied that flashbangs or tear gas had been used, with other sources suggesting a demonstrator had thrown a firecracker. 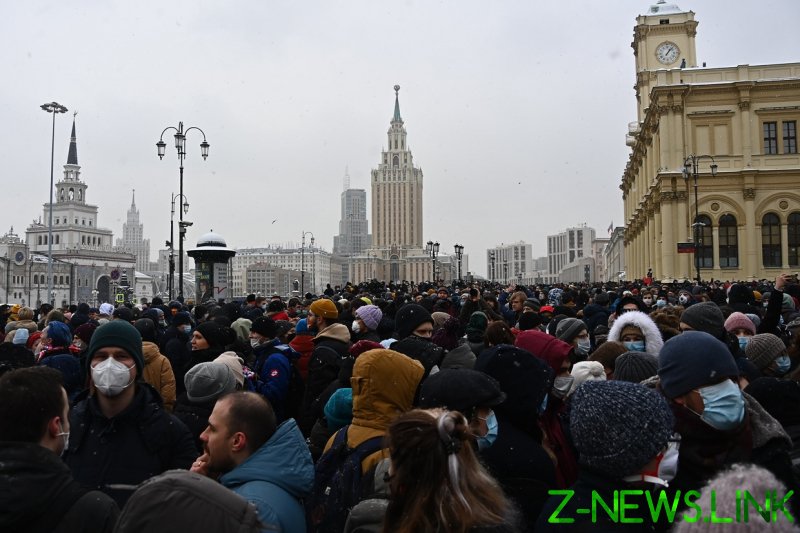 Despite a general decrease in the numbers of those taking to the streets, compared to the previous week, Novosibirsk, Russia’s third largest urban center and the administrative center of the Siberian Federal District, saw large crowds. It was reported by local media that at least 5,000 people had turned up to the demonstrations in temperatures of -20 degrees Celsius (-4 Fahrenheit). However, Moscow daily Kommersant said its correspondent on the ground believed there were only 2,000 present, and local officials counted 1,300. In total, more than 150 people were arrested in the city, according to authorities. 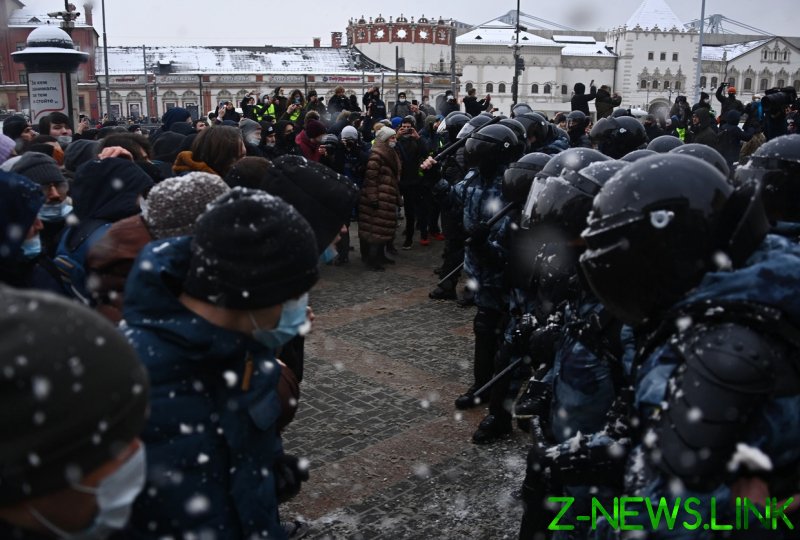 In Moscow, many of the roads and metro stations around Lubyanka Square, where the Federal Security Service (FSB) has its headquarters, were closed. However, a column of marchers gathered further east near the Matrosskaya Tishina pre-trial detention facility where Navalny himself is being held. Dozens were arrested near the prison, and a separate group who gathered at nearby Leningradsky Station were also dispersed, and normal train service resumed in the early evening. Navalny’s wife, Yulia, was also detained in the capital.

As part of their attempts to quell the unrest, security forces in the capital reportedly deployed stun guns and cattle-prod electric batons. One man shocked with a non-lethal device appeared to lose consciousness before being carried off by police.

Another protester was arrested after he approached a line of OMON troops and drew a bat from inside his jacket. However, before he was able to swing it, an officer knocked him to the ground and he was taken into custody .

At the same time, the head of Russia’s Presidential Council for the Development of Civil Society and Human Rights slammed the unauthorized rallies, which are prohibited under coronavirus measures. Valery Fadeev said that “what we are seeing today has nothing to do with protecting rights or fighting for a better life.” He added that “the call of activists to go to Lubyanka, to Staraya Square [both in Moscow], where the FSB buildings are located, where the presidential administration buildings are located – there is nothing behind this but provocation.” 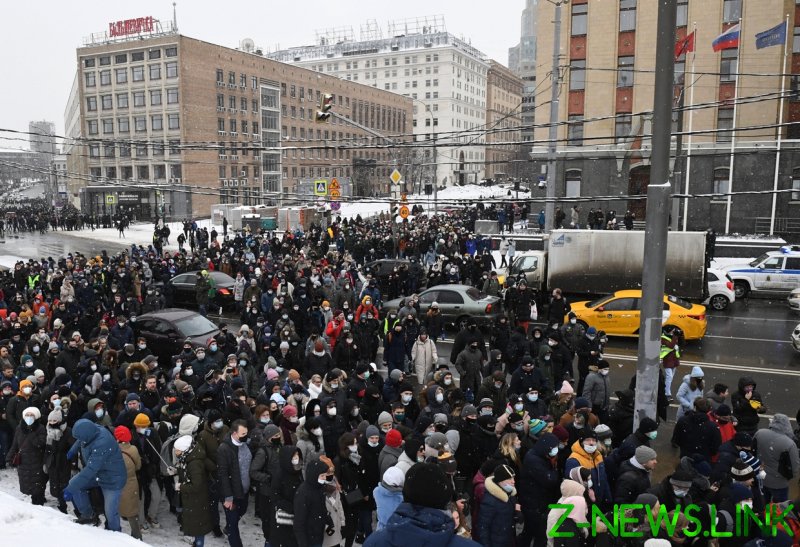 However, the US government was quick to issue a statement criticizing Russian authorities’ response to the protests. New Secretary of State Anthony Blinken said that the administration “condemns the persistent use of harsh tactics against peaceful protesters and journalists by Russian authorities for a second week straight. We renew our call for Russia to release those detained for exercising their human rights, including Alexey Navalny.”

Supporters of the jailed anti-corruption activist renewed calls on the White House to apply a fresh wave of sanctions against Russia on Sunday. A letter from the Anti-Corruption Foundation (FBK), established by Navalny in 2011 and registered in Russia as a foreign agent, listed 35 individuals it said should face punitive measures for being “corrupt Russian allies of President [Vladimir] Putin.”

Leonid Volkov, who once served as Navalny’s chief of staff, has played a significant role in organizing the protests from Lithuania, where he now lives. He finished up a livestream broadcast calling an end to the day of protesting, as people had already begun filing home. Volkov added that a new wave of demonstrations would be planned for February 2, to coincide with the first day of Navalny’s trial.