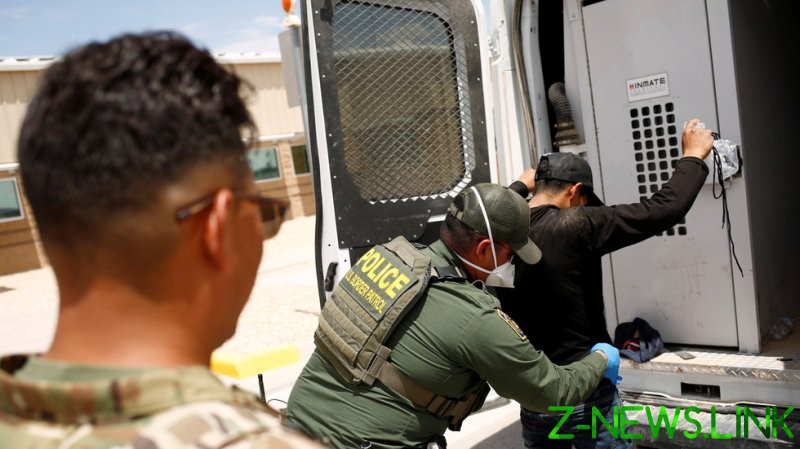 “Everyone shows up to work sort of downtrodden, almost dead inside, for lack of a better term,” Jon Anfinsen, a spokesman for the Border Patrol’s union, told the Washington Examiner in an article published on Sunday.

The US has set new 20-year highs in each of the past two months for the number of illegal aliens encountered by Border Patrol, including 213,000 in July, after Biden dismantled the policies of his predecessor Donald Trump, which he called “an assault on the dignity of immigrant communities.” Agents know that many more people are crossing the border undetected, as hundreds of agents have been pulled from the field to process and care for the crushing flow of migrants.

“Agents are primarily indoors, processing, and we’re dealing with the people who are flagging us down – the ones who are walking up to us and turning themselves in,” Anfinsen said. “Meanwhile, the immigrants who don’t want anything to do with us, they’re running away, although sometimes they’re walking because they have no need to run because we’re not there.”

In one 245-mile stretch of the southwest US border, there are only 12 agents patrolling, a record low, the Examiner said. On one recent day, the busy McAllen, Texas, Border Patrol Station had just one person and a dog working in the field because all other agents were needed for non-enforcement tasks, such as processing and transporting illegal migrants.

That’s especially troubling to agents, knowing that drug traffickers and suspected terrorists, among other threats, are exploiting the porous border. People on the FBI’s terrorist watchlist are crossing into the US at an unprecedented level, according to Rodney Scott, whom the Biden administration forced out as Border Patrol chief earlier this month. Also this month, Mark Morgan, a top border official in the Obama and Trump administrations, said the Biden administration has dropped at least 40,000 illegal aliens infected with Covid-19 into US cities.

The Examiner said many field agents have been turned into corrections officers, being jammed into crowded holding facilities with dozens of migrants packed in small rooms. Morgan said 37 employees have died from the virus since the pandemic began.

The newspaper said its reporting was based on interviews with five current agents and three former senior officials who worked in the Biden administration. The administration has prohibited Border Patrol employees from speaking to media outlets without permission and stopped allowing reporters to do ride-alongs with enforcement agents.

“The mission is no longer deter, detect, detain,” one agent said. “It is wait until they have all crossed, Uber them to the station and process. Morale is below the Mason-Dixon line. We need more agents on the line, not at hospital or processing.”

The agent added that more operatives are also needed to do intelligence work to target the cartels that are smuggling migrants.

Asked about the alleged plunge in morale, the US Customs and Border Patrol sent a statement to the Examiner, saying it’s fortunate to have agents who “remain resilient as we seek to improve enforcement efforts along the border.” The statement added, “Day in and day out, our Border Patrol agents continue to meet the need to protect our nation’s border as well as process migrants safely and expeditiously.”