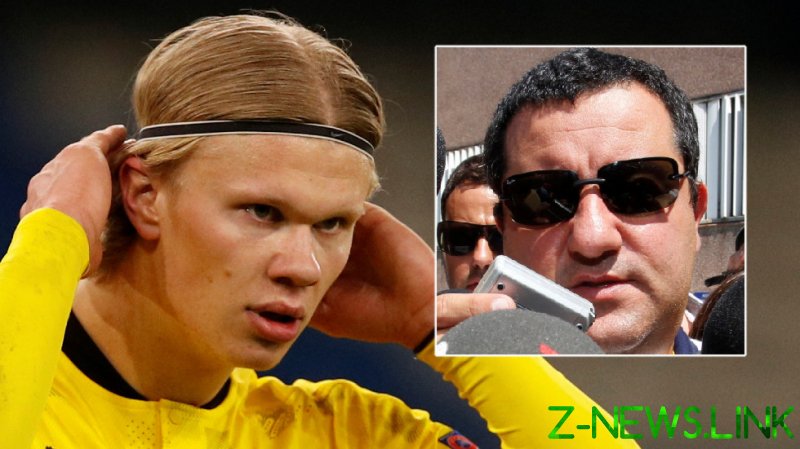 Haaland’s performances this term for Borussia Dortmund have earmarked the 20-year-old Norwegian as football’s most in-demand young talent, leading to speculation that a transfer tug-of-war is about to begin after Raiola and Haaland’s father, former Manchester City player Alf-Inge, embarked on a whirlwind tour in recent days, meeting with a host of Europe’s top clubs in a bid iron out what would likely be a record-breaking transfer deal.

But any clubs preparing a bid for the young assassin will have to pay up amid reports that Raiola and Haaland are seeking a bumper £1 million per week wage ($1.37 million / €1.15 million).

Those mammoth wage demands are likely to end the interest of some of Haaland’s suitors, with only the likes of Paris Saint-Germain and Manchester City considered to be in the type of financial position to sanction such a deal.

Spanish giants Barcelona and Real Madrid are both understood to be interested, but the cashflow issues that both are currently experiencing are likely to mean that their pursuit of the player will be determined by whether or not they can haggle Raiola and Haaland out of their position.

Chelsea and Roman Abramovich are also said to be considering an offer but, again, Haaland’s wage demands would topple the pay structure at Stamford Bridge, leading to concerns of potential dressing room malcontent.

Chief among Raiola’s salesmanship for any deal is his belief that Haaland will soon usurp the likes of Lionel Messi and Cristiano Ronaldo and take his place alongside PSG’s Kylian Mbappe as the two forwards who will dominate football for the next decade or more.

As for Dortmund’s price-tag, reports indicate that they are seeking a mammoth £154 million transfer fee (around $211 million) this summer, although Haaland’s contract means that he can leave the club in the summer of 2022 for the far-reduced fee of £68 million (around $93 million) – a factor that might well embolden Borussia Dortmund to aggressively pursue a transfer in the coming months.

If Dortmund are licking their lips at the potential transfer windfall they might receive this summer, they are maintaining a very strict poker face.

“We don’t have a parallel plan. We’ll discuss this with Erling, his father and his agent Mino Raiola in peace,” the club’s CEO, Hans-Joachim Watzke, told Goal.

“We also want him to stay with us, to score goals for BVB next year with conviction. There is no alternative plan.”

Dortmund are well-used to fighting off the advances of major European clubs for their young talent, as evidenced by their dogged refusal to budge from their demands amid Manchester United’s all-in pursuit of Jadon Sancho last summer.

They might find it harder to resist when it comes to Haaland – particulary if Raiola continues to place his prized asset so obviously in the shop window.