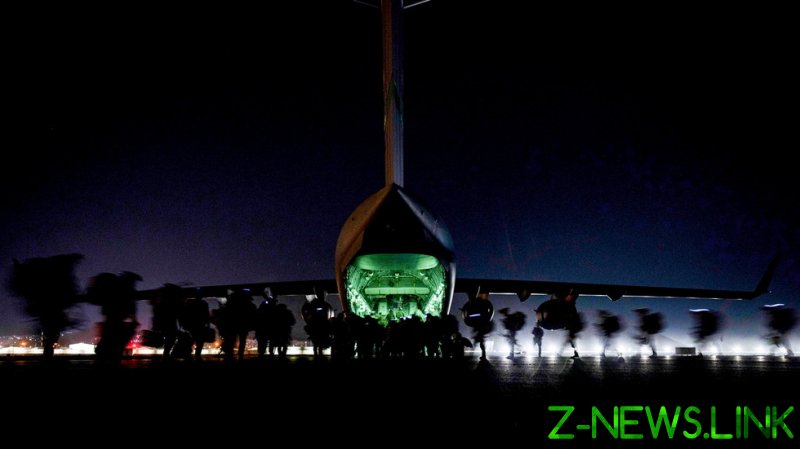 Mainstream media outlets, including CNN, reported on the overland evacuation on Monday, citing a senior State Department official as saying, “Our embassy greeted the Americans as they crossed the border into the third country.” The neighboring country where the four people crossed the border wasn’t identified.

While the State Department ‘facilitated’ the departure by waiting with open arms in the neighboring country, a private group called PlanB reportedly engineered the rescue. The unidentified State Department official acknowledged that the evacuation was the Biden administration’s first such facilitation since the US military completed its withdrawal from Afghanistan last week.

Meanwhile, PlanB and other private rescuers have reportedly blasted the State Department for being the main hindrance to their efforts to bring out thousands of Americans and Afghan allies. Rick Clay, who heads PlanB, told Fox News on Sunday that the State Department is the only thing preventing the evacuation flights that he’s organizing from leaving the country.

Fox quoted two other Americans involved in evacuation efforts as saying that delays in State Department approvals are preventing their charter flights from departing Afghanistan for Qatar. “If one life is lost as a result of this, the blood is on the White House’s hands,” one rescuer said.

It is not the Taliban that is holding this up – as much as it sickens me to say that – it is the US government.

The same person, whom Fox didn’t identify to avoid jeopardizing evacuation efforts, said the Biden administration’s obstruction stems at least partly from embarrassment that private parties are rescuing Americans whom the government left behind.

White House Chief of Staff Ron Klain told CNN that around 100 US citizens remain in Afghanistan, but US Representative Michael McCaul (R-Texas) said on Sunday that according to classified information he’s been given, there are ‘hundreds’ of Americans still stranded. An Associated Press report indicated that US estimates for those left behind are far too low, as the government isn’t counting people who didn’t register with the embassy in Kabul before it closed or legal permanent residents.

McCaul, the top-ranking Republican on the House Foreign Affairs Committee, also accused the Taliban of preventing six planeloads of Americans and Afghan allies from departing the airport at Mazar-i-Sharif, calling the delay a “hostage situation.” But one of the flight organizers told Reuters on Sunday that the State Department was to blame, having failed to tell the Taliban of its approval for the departures or validate a landing site.

President Joe Biden last week called his administration’s evacuation efforts from Kabul an “extraordinary success,” despite hundreds of people being killed during the chaotic US withdrawal and his failure to honor a pledge to stay in the country until all Americans who wished to leave were brought out.

The US government has been accused of hindering Americans from leaving Afghanistan even before the Pentagon ended its 20-year occupation of the country on August 31. Journalist Michael Yon, a former US special forces soldier, told RT that 49 Americans who had been cleared through Taliban checkpoints for departure on three civilian jets on August 30 were refused entry to the Kabul airport by the military.

The military’s Afghanistan commander, Marine General Kenneth McKenzie, told reporters last week that no American civilians were on the final five flights out of Kabul because they weren’t able to make their way to the airport. But Yon called such claims false, saying Americans were left literally at the gates.

He added that the government has continued to stand in the way of volunteer rescues after the withdrawal. “Our biggest problem in getting people out actually is the US government,” Yon said. “It’s not the Taliban. I know that sounds crazy… The military and the Department of State are in our way at this point. In addition to leaving people behind, they’re stopping us from getting them out now.”

The administration helped evacuate more than 120,000 people, including about 5,500 Americans, while the US military controlled the Kabul airport.