Home / WORLD / Matthew McConaughey calls out intolerance and hate from ‘far left’. Their response? Shut up and check your ‘white privilege’

Matthew McConaughey calls out intolerance and hate from ‘far left’. Their response? Shut up and check your ‘white privilege’ 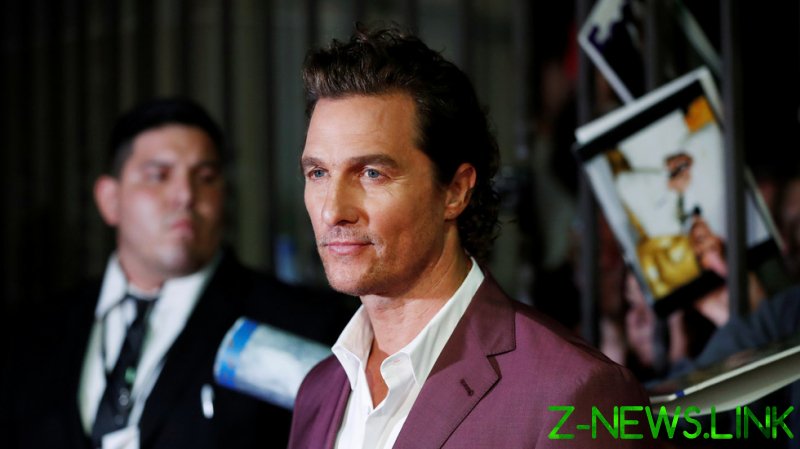 While recently promoting his memoir ‘Greenlights’ on comedian Russell Brand’s podcast ‘Under the Skin’, McConaughey was asked to weigh in on the “condemnation and criticism” of “ordinary working people” by the media and liberal Hollywood.

“There are a lot [of people] on that illiberal left that absolutely condescend, patronize, and are arrogant towards that other 50 percent,” the ‘Dazed and Confused’ actor responded in agreement, then targeting his own industry for being in “absolute denial” over Trump winning the presidency in 2016, something he sees on the right at the moment with Biden’s victory.

The actor took things a step further and really broke from liberal Hollywood when he called out celebrities for theircalls to “get out and vote,” which typically come in the form of videos filled almost entirely with stars that spend their days slamming anyone who thinks differently from them.

“This is where the left misses it for me, just as far as being a marketer of a political side. When you say, ‘Hey, we want to get out the vote; we want people to be able to go vote; we’re going to do a campaign to let people vote.’ I’m like, 100 percent. Yes, everyone,” the actor said.

“And then they can’t help themselves,” he later added. “At the very end of it, they go, ‘So we don’t let those criminal bastards get back in office.’ You’re going, ‘Whoa!’ You’re like, no, don’t say the last part. You lost 50 percent of your audience.”

McConaughey believes the left needs to “understand the science of ‘meet in the middle.’”

The ‘Gentlemen’ star reiterated his call for unity in a separate interview with Time where he theorized there is “a common denominator of values that we can all agree on that are bipartisan and nondenominational” that, if recognized, can end the “great divide” the US is facing.

On the surface what the Texas-born actor is saying doesn’t seem all that controversial. He’s simply calling for a political side that preaches tolerance to actually practice it, and floating the idea that perhaps taking a more centrist approach to issues could be healthy for a culture steeped in tribalism.

All sounds fairly reasonable, right? Wrong. In the modern world, such calls for an end to political divides and liberal hypocrisy, especially from a celebrity, is extremism. While McConaughey found some praise from conservatives, the left has proven the actor right about the very intolerance he accused them of by blasting him on social media for having “white privilege,” excusing sexism, racism, etc.

“Being ‘aggressively centrist’ as Matthew McConaughey claims to be is to be aggressively privileged. It is to pick no sides, therefore living in purgatory of action. A straight, rich white dude who is sheltered from many of the reasons why people on the ‘far left’ are passionate,” author Luvvie Ajayi tweeted.

“I enjoy Matthew McConaughey as a performer but his politics reek of the sort of white male privilege that guarantees he’s never had to truly evolve,” comedian Cyrus McQueen added. “To call the left arrogant when liberals have traditionally succumbed to the bigoted and peremptory hamstringing change is dishonest.”

In this upside-down world we call reality, it has become more controversial on the left to call for centrism, now illogically equated to privilege, than it is for liberals to curse out or use racist language to attack those they disagree with.

It should give critics of McConaughey pause that what he’s saying makes them so angry. An artist having an open discussion about how people can create a world where they don’t want half the country to simply disappear is somehow more triggering to them than any of the vitriol we typically see come out of the mouths of Hollywood’s most outspoken stars.

This, however, would require logic and an ability to listen to opinions that don’t align with your own, and such things are not considered healthy in our current culture.

The only chance of that culture changing though is for people like McConaughey to continue using their voices to push back against it. So for those who can look at the world without blinders glued to their heads, ignore the hate and give such thinkers the props they deserve for speaking truth in a world that is growing more and more confrontational toward it.