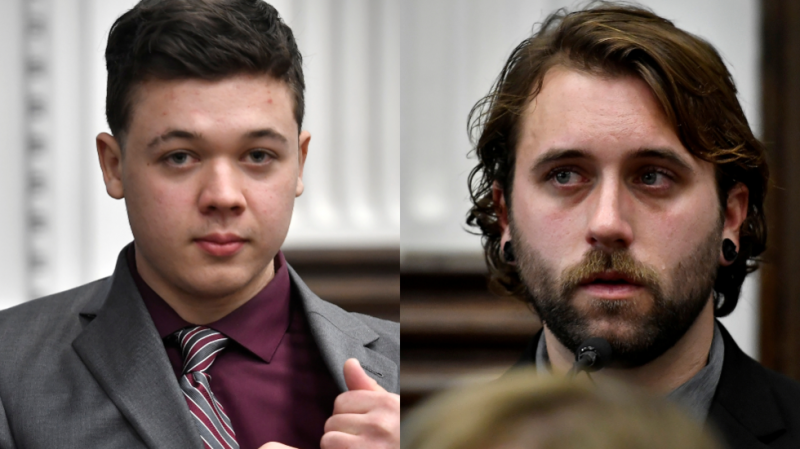 Conservatives say that the shocking admission, made in court in Wisconsin on Monday,  proves the teen’s self-defense case.

Gaige Grosskreutz, 27, was wounded by Kyle Rittenhouse, then 17 years old, during violent protests in Kenosha, Wisconsin, last August. Rittenhouse shot and killed two other men that night – 36-year-old Joseph Rosenbaum and 26-year-old Anthony Huber, and is currently facing two counts of first-degree homicide and one count of attempted homicide, as well two counts of endangerment and two misdemeanor charges.

Although he was regarded by some pundits as the prosecution’s star witness, Grosskreutz’s testimony on Monday seemed to bolster Rittenhouse’s lawyers’ argument that the teen acted in self-defense.

Under examination from defense attorney Corey Chirafisi, Grosskreutz said “no” when asked if it was only when he pointed a gun at Rittenhouse that the teen fired back. However, confronted with an image of his bicep being blown apart by a shot from Rittenhouse’s rifle as he pointed his weapon directly at the teen, Grosskreutz agreed with Chirafisi that “it wasn’t until you pointed your gun at him, advanced on him…that he fired.”

Conservatives and pundits on Rittenhouse’s side instantly took Grosskreutz’s admission as concrete proof that Rittenhouse acted in self-defense. Video shot from an alternate angle in the courtroom even appeared to show Kenosha County Assistant District Attorney James Kraus “literally facepalm” as he heard Grosskreutz speak.

Throughout his testimony, Grosskreutz also admitted that he was illegally carrying a weapon the night he was shot, that he neglected to mention this weapon in a lawsuit against the City of Kenosha and its police department, and that he judged Rittenhouse’s life to be in danger when he shot and killed Huber.

Grosskreutz denied that he told his roommate, Jacob Marshall, that his “only regret was not killing the kid,” as Marshall claimed on social media after visiting Grosskreutz in hospital last August. Marshall is set to testify on Wednesday, having been served a subpoena on Monday.

During the first week of testimony, multiple witnesses described Rosenbaum – the first man shot by Rittenhouse on the night in question – as “hyper-aggressive” and “acting belligerently.” One witness, a video editor with the conservative Daily Caller news site, told the court how he saw Rosenbaum threatening to kill Rittenhouse and “lunging” for his gun before the teenager opened fire.

If convicted of first-degree homicide, Rittenhouse faces life in prison.