Home / WORLD / Mainstream media hails SPD success in German election, but will the CIA be the ultimate winner?

Mainstream media hails SPD success in German election, but will the CIA be the ultimate winner? 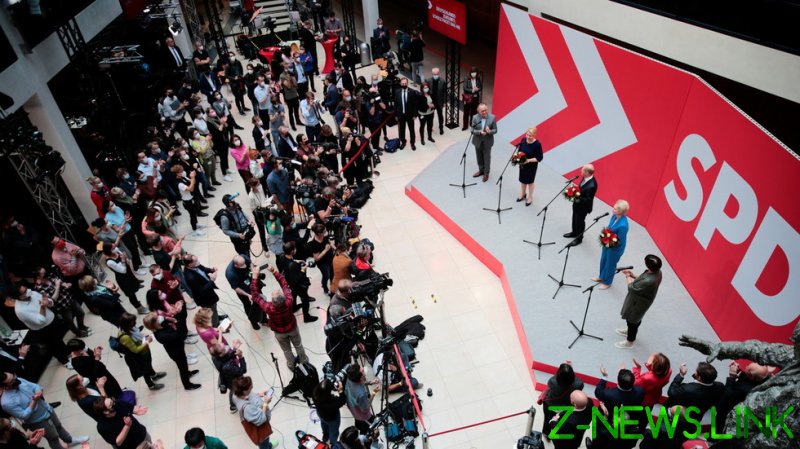 On September 26, Germans went to the polls to elect their new government. As the results emerged, it became increasingly apparent that the Social Democratic Party (SPD) had narrowly scraped to victory ahead of the Christian Democratic Union. It’s now in a position to form an administration for the first time since 2005.

Party chief Olaf Scholz has indicated he will seek a three-way coalition, along with the Greens and Free Democrats – if successful, he will be only its fourth chancellor since World War II. It also marks the CDU/CSU bloc’s single worst election showing ever, leading many Western news outlets to label the outcome a ‘shock.’ In a desperate scramble to get readers acquainted with Berlin’s likely new leaders, the media has had much to say about the SPD, its history, policies, and key figures.

Entirely absent from mainstream biographies of the party has been any mention of the pivotal role played by the US Central Intelligence Agency in supporting it and shaping its policies during the Cold War. First exposed by Agency whistleblower Philip Agee in his 1978 tell-all book ‘Dirty Work: The CIA in Western Europe’, this clandestine background has implications not only for the SPD, but for German politics and economics more generally in the present day.

Following World War II, Washington emerged as the world’s undisputed military and economic superpower. As Agee records, the overriding aim of US foreign policy thereafter was to “guarantee the coherence of the western world” under its leadership, and CIA activities were “directed toward achieving this goal.” In service of its world domination project, “left opposition movements had to be discredited and destroyed.”

After West Germany was forged from the respective occupation zones of the US, UK, and France, the fledgling country became a particularly “crucial area” in this regard, serving as “one of the most important operational areas for far-reaching CIA programs.” Agency operations in Germany itself were explicitly concerned with ensuring the country was “pro-American,” and structured according to US “commercial interests.”

In the process, the CIA covertly supported the CDU and SPD, and trade unions, as the Agency “wanted the influence of the two major political parties to be strong enough to shut out and hold down any left opposition,” Agee explained.

The SPD had a radical, Marxist tradition – it was the only party in the Reichstag to vote against the 1933 Enabling Act, which laid the foundations for the total Nazification of Germany, leading to its proscription. Newly reinstituted following the war, the SPD clung to its revolutionary roots until 1959 when, under the Godesberg Program, it abandoned any and all commitments to challenging capitalism in any serious way. It stretches credibility to assume that the CIA wasn’t involved in neutering the party somehow.

In any event, effective control of West German democracy ensured that Washington’s “enormous presence” there – which included hundreds of thousands of troops and almost 300 separate military and intelligence installations – wasn’t challenged by those in power, irrespective of to which party they belonged, despite a majority of the population consistently opposing the US occupation.

This presence, in turn, granted the CIA “a number of different covers to work behind” according to Agee, although the majority of its operatives were embedded within the US military, posing as mere troops – the agency’s biggest station was said to be an army base in Frankfurt, although it also boasted units in West Berlin and Munich.

US spies working under military cover were said to be “highly qualified technicians who tap telephones, open mail, keep people under surveillance, and encode and decode intelligence transmissions,” conducting investigative work “all over the country.”

Dedicated divisions were charged with “making contact with organizations and people within the political establishment,” such as the SPD and its elected representatives, with all the information collected “used to infiltrate and manipulate these organizations.” Langley, moreover, “very closely” collaborated with West German security services in many of these domestic spying efforts, with the country’s assorted intelligence agencies conducting operations at the agency’s direct suggestion, “often [to] protect CIA activities from any legal consequences.”

This set-up was reportedly common, but there were allegedly “difficulties” in the CIA’s relationship with its West German counterparts, owing to a lack of trust – Langley consequently felt a pronounced need to “keep an eye” on its collaborators.

This apparent lack of faith was nonetheless no barrier to the agency partnering with the Bundesnachrichtendienst, West Germany’s foreign intelligence service, in its purchase of Swiss encryption firm Crypto AG in 1970. Perhaps the former was exploiting the latter to “protect CIA activities from any legal consequences.”

Crypto AG produced high-tech machines through which foreign governments could transmit sensitive high-level communications around the world, safe from prying eyes – or so they thought. In reality, the secret owners of Crypto AG – and by extension the NSA and GCHQ – could easily decipher any messages sent on the firm’s devices, as they themselves crafted the encryption codes. The connivance operated in total secrecy for decades thereafter, only being exposed in February 2020.

The full extent of the information collected via Crypto AG – along with key national competitor Omnisec AG, which the CIA also owned – and the purposes to which it was put is unknown. It would be entirely unsurprising, though, if the harvested data helped inform CIA operations to “discredit and destroy” left-wing opposition in West Germany and beyond, efforts that no doubt continue to this day.

The Cold War may be over, but Germany remains heavily occupied, hosting the largest number of US troops of any European country, despite an overwhelming majority of the population supporting their partial or total withdrawal in the years following the Berlin Wall’s collapse.

In July 2020, then-President Donald Trump announced the withdrawal of 12,000 soldiers of the 38,600-strong contingent still there. While framed as a punitive measure taken in response to the greenlighting of Nord Stream 2, polls indicated most Germans were only too happy to say auf wiedersehen – 47 percent were in favor, while a quarter called for the permanent closure of all US bases on their soil.

A mere two weeks after entering the White House, Joe Biden reversed his predecessor’s policy, returning 500 soldiers who’d departed Germany and scrapping plans to relocate the Stuttgart-based US Africa Command, which effectively embeds Washington in the armed forces of 53 countries across the continent, to elsewhere in Europe. Research shows the Command’s training programs have precipitated a significant rise in the number of military coups in Africa.

As Agee attested, where there’s US military, there’s US intelligence, so clearly Berlin is to remain “one of the most important operational areas for far-reaching CIA programs” within and without the country,whether German citizens like it or not.

It’s for this reason that the former agency operative’s talk of Langley doing all in its power to “shut out and hold down any left opposition” resonates so sinisterly today. After all, this is precisely the fate that has befallen upstart Die Linke, which didn’t breach the five percent Bundestag threshold this time round, leaving it with a measly 39 seats.

That’s quite some fall from grace considering that during the 2013-2017 parliament, it was the Bundestag’s primary group – but entirely understandable, given it’s long been a matter of public record that Die Linke and its elected representatives are subject to intensive surveillance from Germany’s domestic intelligence agency, despite this latter monitoring being theoretically unconstitutional. Its file on long-time troublemaker Petra Pau, Bundestag vice-president, was reported in 2012 to run to at least 600 pages thick.

The party’s policy platform being far from pro-American or conducive to US commercial interestsmay explain this intrusion, as may the CIA’s hidden hand in its precipitous decline in recent years.