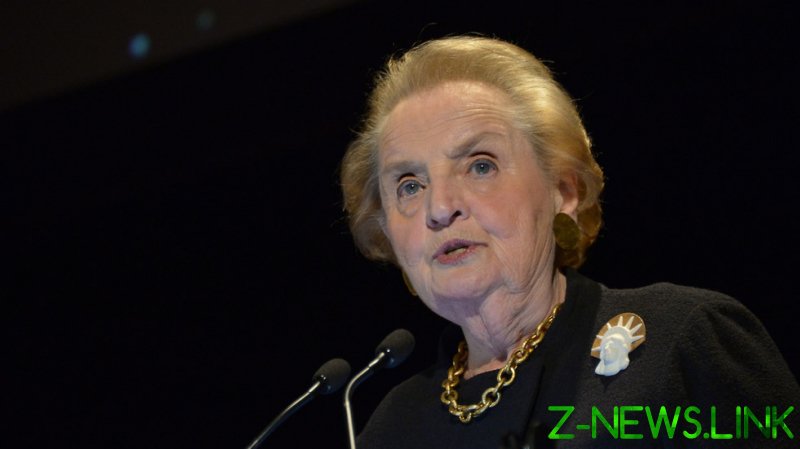 Madeleine Albright, the first woman to serve as the top US diplomat, passed away on Wednesday at the age of 84, her family confirmed, listing the cause of death as cancer.

“We are heartbroken to announce that Dr. Madeleine K. Albright, the 64th U.S. Secretary of State and the first woman to hold that position, passed away earlier today. The cause was cancer,” said a statement posted on Albright’s Twitter account by her relatives.

The family called Albright a “tireless champion of democracy and human rights” and a refugee “who rose to the heights of American policy-making, receiving the Presidential Medal of Freedom in 2012, the nation’s highest civilian honor.”

At the time of her death, Albright was a professor at Georgetown University’s School of Foreign Service, head of the consulting firm Albright Stonebridge Group, and chair of the National Democratic Institute and the US Defense Policy Board, a civilian Pentagon advisory group.

Albright served as the US secretary of state – the first woman ever to hold the job – during President Bill Clinton’s second term, 1997-2001. During the Democrat’s first term, she represented Washington in the UN.

As the ambassador, Albright infamously defended the US-led campaign of sanctions against Iraq, telling Lesley Stahl of ‘60 Minutes’ in May 1996 that “We think the price is worth it” when asked about half a million children that reportedly died as a result.

In February 1998, she defended Clinton’s bombing of Iraq by calling the US “the indispensable nation” that has the right to use force, adding, “We stand tall and we see further than other countries into the future, and we see the danger here to all of us.”

She was born Marie Jana Korbelova in Czechoslovakia in 1937. Her father Josef worked as a diplomat at the Czech embassy in what was then Yugoslavia. After Nazi Germany occupied Czechoslovakia, Korbel fled with his family to the UK and renounced his Jewish faith to become a Catholic. He returned to Belgrade as an ambassador in 1945, but sent his daughter to a boarding school in Switzerland, where she was nicknamed “Madeleine” – reportedly after the tea biscuit. By 1948, Korbel and his family once again fled to the West, this time to the US.

Madeleine became a naturalized US citizen in 1957, and married Joseph Medill Patterson Albright – scion of the Medill Patterson publishing empire – in 1959. They had two daughters, but divorced in the 1980s. In the late 1960s, Albright attended graduate school at New York’s Columbia University, where she studied under Zbigniew Brzezinski – who later recruited her for the White House when he became President Jimmy Carter’s national security adviser.