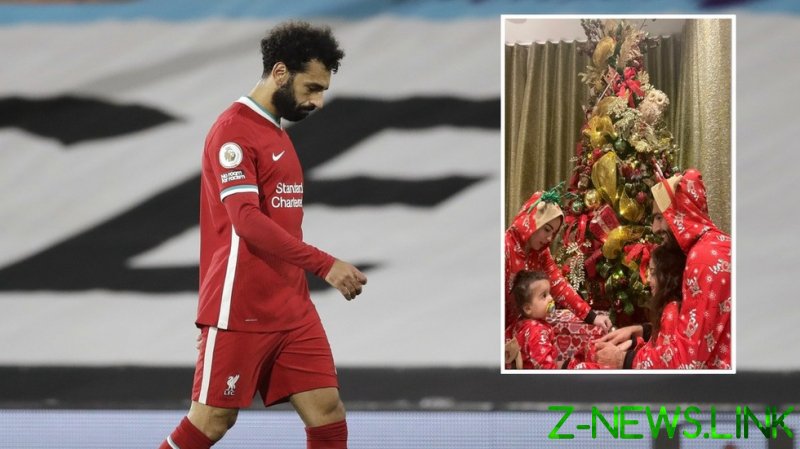 Salah, 28, posted images to his social media following of more than 50 million featuring himself and his family dressed in festive attire sitting in front of a Christmas tree, adding two emojis and the hashtag #MerryChristmas.

But among the positivity for Salah’s message the posts also sparked a row among some fans who argued that the Muslim star should not be seen celebrating Christmas.

“As a Muslim we should not celebrate or even congratulate other religions in their celebrates that’s all,” read one reply.

“That’s why [Arsenal and Egypt player] Mohammed Elneny is the Egyptian king & not u,” read another spite-filled response.

“Today You are a Christian and tomorrow you are Muslim. You will explain this to ur creator,” came another vicious reply.

“People need to realize we don’t hate Christmas but being supportive of it is a major sin in Islam. It’s basically shirk!!” fumed another.

“It is not permissible to celebrate the holidays of the infidels,” read another comment in Arabic.

“This is why I love ufc BROTHER KHABIB the most from all the famous MUSLIM stars… He never COMPROMISES his deen Alhamdulillah… Muslims don’t celebrate Christmas but you all can enjoy yours… We have our EID ….,” wrote another person, referring to Russian UFC champion Khabib Nurmagomedov, who is also Muslim.

Many, however, defended Salah’s message of peace and love, with one person writing: “If you’re crying under this tweet pls cry in English. Save us the stress of translating.”

“I live in Dubai and Xmas trees in all the malls, Xmas songs in all the shops, Xmas markets everywhere and that’s in a Muslim country, imagine that but intensified times 100 in the UK, is he really gonna deprive his daughter of all that joy & happiness her friends are experiencing?” read another.

Salah has been at the center of speculation over his future this week after claims that he was unhappy with life at Liverpool and could be linked with a move to Spain.

Reds boss Jurgen Klopp played down those suggestions at a press conference on Thursday, saying the prolific forward was “in a good mood” as the team prepares for the Premier League game with West Brom on December 27.

Salah has 16 goals in 21 appearances for Liverpool this season. He typically performs sujud, the Islamic act of prostration, after each of his goals.