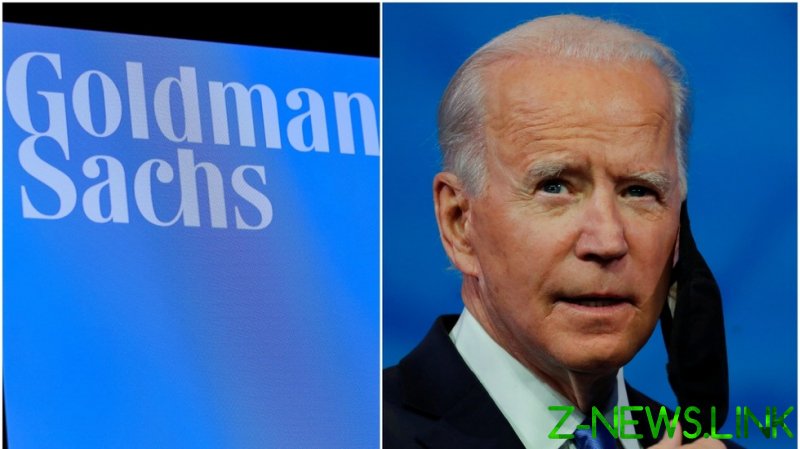 The timing of the appointments is auspicious, coinciding with the Electoral College vote to officially certify Biden’s victory. While it’s not clear whether the Biden team deliberately chose to swear fealty to the bank that has become a byword for neoliberal excess after it was too late for electors to change their minds, coziness with Goldman Sachs has proven an unwieldy albatross necklace for several of Biden’s predecessors.

Failed presidential candidate Hillary Clinton, for example, was eviscerated on the campaign trail in 2016 over her apparent coziness with Wall Street and Goldman in particular, slammed by Democratic socialist rival Bernie Sanders over her refusal to release the transcripts of several highly-paid speeches she gave to the bank. Supposed transcripts of the speeches released by WikiLeaks ahead of the vote had Clinton gushing that only Wall Street insiders were qualified to regulate Wall Street, suggesting the candidate planned to hand regulatory power to the same people who’d broken the economy in 2008.

And even former President Barack Obama, under whom Biden served as vice president, was lambasted by progressive Democrats for essentially allowing investment bank Citigroup to appoint his cabinet in the wake of the almost half-a-trillion-dollar TARP bailout that put taxpayers on the hook for paying off Wall Street’s gambling debts. Citi exec Michael Froman, whom Obama appointed as US trade representative, sent out a list of nearly three dozen cabinet selections, most of which the incoming president filled as advised.

And despite vowing to “drain the swamp” of Washington insiders, revolving-door lobbyists, and corrupt career criminals, President Trump himself appointed Goldman Sachs banker Gary Cohn as director of his National Economic Council as he prepared to take office in 2017. Treasury Secretary Steve Mnuchin, too, boasted a lengthy stint with the “vampire squid” before leaving in 2002 to work for a series of hedge funds. The hires earned Trump jeers from his supporters, who perhaps naively assumed the popular slogan meant he wouldn’t shunt the swamp’s slimiest slithering specimens directly into his cabinet.

While the lack of daylight between Biden’s and Trump’s economic policies has shocked some, clear-eyed progressive critics of the incoming Democrat administration saw Biden’s bait and switch coming from miles away, deriding so-called “Bidenomics” as more of the same American trickle-up neoliberalism designed to rip off the working class and line the pockets of the wealthy. Wall Street donors spent upwards of $74 million to install their superannuated candidate in the Oval Office, leaving little doubt on who the fat cats’ presidential pick might be.

But a few deluded souls who genuinely believed they could push the establishment careerist “to the left” have taken the Biden campaign’s decision to mix the worst aspects of Obama and Trump’s pillage party as a personal affront. The Democrat’s cabinet is populated almost entirely with second-stringers from the Obama years, from the then-Federal Reserve chief Janet Yellen (now tapped for Treasury secretary) to virulent anti-Sanders harpy Neera Tanden (poised to become head of the Office of Management and Budget) – and Goldman Sachs and its fellow investment banks aren’t even the most rapacious financial firms on the scene anymore.

That honor goes to BlackRock and its fellow private equity vulture capitalists. As usual, Biden’s people have their finger squarely on the nation’s pulse as they prepare to rip the still-beating heart out of the US’ economic corpse: BlackRock exec Brian Deese has been tapped to lead the cabinet’s National Economic Council.

Nevertheless, many of Biden’s supporters celebrating his victory seem blind to the similarities between their hopes for real, ground-breaking change and those of supporters of both Obama and Trump. These hopes stubbornly persist even after the former VP assured his donors last year that “nothing will fundamentally change” when he takes over. Meet the new boss, same as the old boss.